“We are not afraid of Roger Khan’s release”- Bharrat Jagdeo 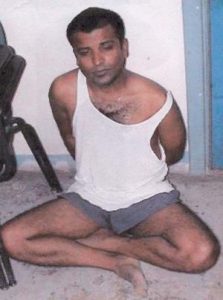 Shaheed ‘Roger’ Khan shorty after he had been captured in neighbouring Suriname.

Former President Bharrat Jagdeo on Thursday declared that he had nothing to do with convicted drug lord, Shaheed ‘Roger’ Khan or a phantom gang and said if he is found guilty of crimes here, he should be jailed again.

Khan, who is expected to be released on July 8, 2019 from a US jail for trafficking cocaine to that country, had stated in several newspaper statements before he had been captured in neighbouring Suriname that he had prevented the Jagdeo administration from being toppled by a coup.

Jagdeo said although police and soldiers had faced resistance from pro-government supporters in going after heavily armed gang members, his then administration had never linked up with Khan or the notorious phantom squad at the time. He said the then government had “the entire force of the State” of well-trained soldiers and police to fight criminals and so there had been no need for gangs.

“We had men who were authorised to carry weapons and, empowered by our laws and constitution, to fight bandits… The problem was every time the soldiers went into Buxton, you had two political leaders from APNU (A Partnership for National Unity) who would show up there, mobilised people, got 30 women and kids to come out in front of the soldiers. The bandits are running to the backdam and so you can’t shoot at them,” he said.

He also reminded a news conference that Khan had also stated in a full-page advertisement that the then opposition People’s National Congress Reform (PNCR) “were funding the bandits and creating the reign of terror”. “You can’t believe conveniently,” said Jagdeo who was President from 1999 to 2011.

Suggesting that lawyers for phantom gang members at that time had been linked to the then political opposition, Jagdeo added that President David Granger now appeared reluctant to hold a Commission of Inquiry into the “troubles” of 2002 to 2008 – a period of murders, massacres, disappearances, kidnappings and robberies – because he feared of connections being known. “Why do you think President Granger does not want a Commission of Inquiry into this matter? …I think he was dissuaded from investigating this period because, by now, a lot of those same PNC people, some of them – the top officials – that many of them would now be facing court action,” he said. 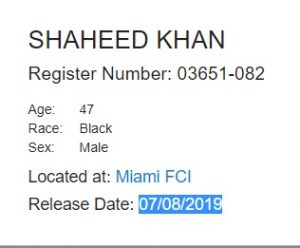 Shaheed ‘Roger’ Khan’s release date, according to the United States’ Bureau of Prisons.

Asked whether he believed Khan should be prosecuted for any crimes he allegedly committed in Guyana, Jagdeo said “if any charge could be proven against him, the State has all the authority and the right to do so”.

Told that evidence in a US court had shown that then Minister of Health, Dr. Leslie Ramsammy had allegedly authorised on a government letterhead the purchase of sophisticated telecommunications interception equipment that is sold only to governments, he said that was merely an unsubstantiated claim. “That has never been proven with official testimony. That has never been proven. Leslie Ramsammy said he never did. That is it. It is these old rumours…,” he said.

Khan and several of his cohorts had been arrested by police and soldiers at Good Hope Public Road, East Coast Demerara, in a bullet-proof vehicle with high-powered weapons and cellular phone interception and triangulation/location equipment.

US Embassy diplomatic cables had said that Khan had links to Colombia’s narco-traffickers, and threatened to blow up a US Drug Enforcement Administration outpost if it had been established in Georgetown. The US embassy had also reported that Khan had penetrated almost all levels of the Guyana Government and had also smuggled arms in exchange for cocaine.

Previous: Guyanese workers must be respected and labour laws upheld – Minister of State at RUSAL meeting
Next: Updated: Pilot dies in plane crash at Eteringbang