The pilot of a privately-owned single-engine plane died Thursday evening when the aircraft exploded on landing at the Eteringbang airstrip in western Guyana, the Guyana Civil Aviation Authority (GCAA) confirmed.

“The accident occurred at approximately 17:45h. According to reports reaching the Guyana Civil Aviation Authority (GCAA), the lone occupant of the aircraft has perished. The GCAA will provide more details as it becomes available,” the regulatory agency said in a statement. 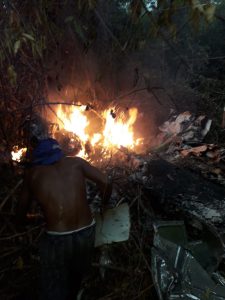 The pilot has been identified as Captain Randy Liverpool, a former Air Traffic Controller.

The Cessna 206, bearing registration 8R-GHB, is owned by Fenix Aviation.

The Guyana Police Force said the accident occurred about five minutes away from the Eteringbang Airstrip,Cuyuni District. “Persons rushed to the scene and the pilot was found engulfed in flames in the wrecked aircraft.  The body which is burnt beyond recognition was later taken to the Eteringbang Police Station waiting to be transported to Georgetown,” police said.

This is the second plane crash in less than one week, but the pilot, Lincoln Gomez, and another occupant survived with minor injuries.

Previous: “We are not afraid of Roger Khan’s release”- Bharrat Jagdeo
Next: RUSAL workers in Guyana throw down gauntlet at company, gov’t