RUSAL workers in Guyana throw down gauntlet at company, gov’t 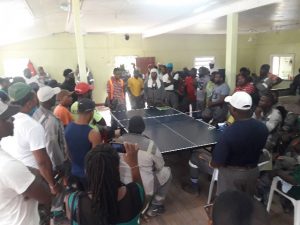 RUSAL-BCGI workers meeting before the arrival of a government team.

At a meeting held at the BCGI Club House, Maple Town, Aroaima (Upper Demerara-Berbice), the workers were told by the President of the Guyana Bauxite and General Workers’ Union (GB&GWU) Branch President, Ephraim Velloza, that their designated spokespersons would make their demands known at the meeting with ministers and government.

They include no break in service, payment for strike days, no victimization by either party, continued recognition of GB&GWU, respect for the 2008 Collective Labour Agreement until a new accord is negotiated, full resumption of work within 72 hours and arbitration to address grievances.

The workers’ representatives want the arbitration panel to include a Chairman to be appointed by the Government and one representative each from their union and the Russian company’s management.

Among their concerns are reduced vacation benefits, payment for selected holidays, poor occupational safety and health, determination of illness by persons who are not medically trained and deteriorating housing for workers.

“We are capable enough of getting this job done,” said Velloza, adding “I assure you that we are looking for speedy resumption of work”.

RUSAL-BCGI on Monday sacked 60 workers who management said refused to return to work despite several requests.

Velloza, however, told Demerara Waves Online News that the workers were locked out.

Expected to meet with the workers at Maple Town are Ministers of Labour Keith Scott and Amna Ally, and Minister of Natural Resources Raphael Trotman.

The Aroaima bauxite mine is located about 140 miles by road south-east of the capital Georgetown.