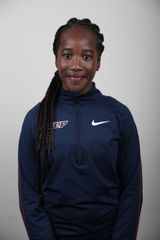 The University of Texas at El Paso (UTEP) track team has always been its own United Nations, a melting pot of athletes from all corners of the globe.

As they head to the Conference USA Indoor Track and Field Championships this weekend in Birmingham, the women’s team is pinning its hopes for a title on a new flag.

Freshman horizontal Chantoba Bright arrived at UTEP this year from Guyana and has almost immediately lived up to her considerable talent, as after some initial adjustments to a new continent, new city, new school and new coach, she sits third in C-USA in both the long jump and the triple jump.

“I like it here because it’s quiet, I know I can focus here,” Bright said.

Guyana is in South America, but culturally it’s an English-speaking Caribbean country, and though Bright is the first woman in recent memory here from Guyana, she’s quickly become a good fit in a program that has had success with athletes from the Caribbean. She was recruited by hurdles coach Lacena Golding-Clarke, a native of Jamaica.

“I’d never competed in America, but it wasn’t hard, actually,” Bright said. “I like El Paso, I like the culture. I like the food, there is so much of it.”

As to the food, her favorite eatery right now is Chipotle.

She’s now coached by Paul Benavides, whose first task was to make some changes in her technique designed to pay long-term dividends with an assumption that there would be short-term growing pains.

“There were a couple of minor technical adjustments we wanted to make on her approach, she had had some injuries throughout her career,” Benavides said. “I wanted to make those without ruining her whole freshman year. She really picked it up quicker than I thought, it surprised me how well she’s going. I didn’t expect it this quickly.”

“It took a little bit of time to fix my technique with my coach,” Bright said. “The first meet didn’t go really well. It just took some time, indoors was new to me, there was an adjustment.”

Early in the winter, jumping indoors for the first time in her life, Bright was in the 17-foot range in the long jump. She’s now up to 20-1 3/4 in the long jump and 41-10 3/4 in the triple jump, marks that are very close to her personal bests.

“She’s very smart, first of all, very gifted, a lot of athletic ability,” Laaksonen said. “It took her a little time to get it going, the first meet she went 17 feet. Last week, she went 20. It wasn’t always smooth, but the last two meets she was very impressive.

“She came in with very impressive marks. She’s never done indoor, that’s a new experience for her, but she’s adjusted really well and she’s getting close to her outdoor marks during indoor. She’s very talented so I can’t wait to see how far she can go.”

Said Benavides: “Her physical attributes are a big part of it, but her work ethic and her focus during training is unbelievable for someone that age. First year in college, a lot of times they have a lot of other distractions and troubles adapting to college life, but she seems to have adjusted very well.”

Bright is also excited about what she can accomplish.

As for specific goals, she has a lot of them.

“In school it’s to make NCs both indoors and out, do my best at conference so I can give my team the most points I can possibly give them.”

She can give them as many as 20 this weekend in Birmingham as UTEP aims for a top-three finish or better in Bright’s first-ever indoor conference championship.