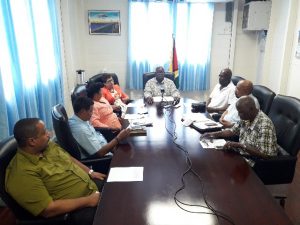 The LGC commissioners briefing the media.

The Local Government Commission (LGC) on Friday announced that it has been “effectively shut down” because the Permanent Secretary of the Ministry of Communities has refused to countersign cheques for salaries and other expenses.

LGC Chairman Mortimer Mingo said the Permanent Secretary argued that the salaries were above the pay scales of the traditional public service.

Mingo said the LGC was yet to be legally approved by the National Assembly as a budgeted independent agency, despite requests to the Minister of State Joseph Harmon and Attorney General Basil Williams.

President David Granger has since acknowledged receipt of a request to intervene in the impasse that dates back to December 2018.

The Commissioners told the media that they and the 27 staff members have not been paid salaries, wages and emoluments. They said on Friday their cellular phones were disconnected Friday afternoon for non-payment.

Also yet to be paid for his work as Chairman of the Commission of Inquiry is retired Chancellor of the Judiciary, Cecil Kennard.

Asked why other expenses such as utility bills have not been paid, Mingo said “we ourselves are at a loss to know so”.

The Commission said the staff were owed an estimated GYD$9 million in wages and salaries for January 2019 and the prospects for being paid for February are extremely dim.

Deputy LGC Chairman, Andrew Garnett said it would be unfair for young, experienced and qualified persons with mixed skills set to be paid traditional public service salaries. “There is no room for upward mobility so you have to compensate them to keep them within the local government system,” said Garnett, a veteran trade unionist.

Government-backed local government commissioner, Clement Corlette accused Minister of Communities, Ronald Bulkan of frustrating the LGC’s work because he no longer has the authority over the local government system. “This is calculated to suppress the Commission so as to make it diminished… and strangling us of money is the easiest way to do it,” Corlette said.

The LGC Chairman said its GYD$305 million budget for 2019 was cut to GYD$124 million for capital and GYD$13 million for recurrent expenses by the Finance Ministry. Following these cuts, the LGC said its expenses were reworked and so “we took out upward adjustment of payments and tweaked (the) budget.”

Garnett said the another GYD$124 million have been allocated for implementing the recommendations of the City Hall Commission of Inquiry.

Previous: No cabinet meetings because there is no stay of High Court’s decisions on no-confidence motion; Court of Appeal begins preparations for hearing
Next: Guyanese jumper Bright emerges as freshman star for University of Texas at El Paso track