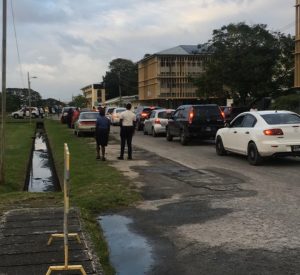 Students and staff in a fleet of vehicles leaving the University of Guyana Turkeyen Campus on Thursday. (photo by Keon Skeete)

She has been identified as Dianne Jafferaly, said to be a close relative of a staunch People’s Progressive Party (PPP) member.

Head of the Guyana Police Force’s Criminal Investigations Department, Deputy Commissioner Lyndon Alves said “we pulled her in” based on phone records and her associates.  He could not say whether she was cooperating with investigators, but said she was still being questioned.

Alves said legal advice would be obtained, possibly at the weekend, because “we do not want to violate her constitutional rights”. The 72-hour continuous detention period expires on Monday.

Jafferali’s lawyer, Latchmi Rahamat, said the woman has denied the allegations put to her. “The young lady has denied all allegations. She is proclaiming her innocence,” she told Demerara Waves Online News.

On the issue of bail, Rahamat said police indicated they were awaiting legal advice. The lawyer declined to divulge the nature of the offence police said they were probing. “They have put an allegation to her. Whether it’s an offence under one of the laws, that is the question. I would wait to see what the DPP [Director of Public Prosecutions] says,” Rahamat said.

The arrest of the woman came one day after the Guyana Police Force said “the arrest and detention of persons is very much imminent.”

Police sought to assure the UG Turkeyen Campus community that the bomb threats were the work of mischief-makers and there was no need for students and staff to be worried about their safety. “Following the recent events where schools and the University of Guyana were receiving bomb threats, the Guyana Police Force wishes to indicate clearly to the general public and specifically to students, teachers, parents/guardians of the schools , the university and its auxiliaries that from our investigations there is no significant threat. Our investigations have revealed so far that students either by themselves or with other persons decided to be mischievous and endeavour to disrupt the existing peace and calm in society and specifically in the education sectors,” the law enforcement agency said.

UG on Thursday announced that it would be closed until next week Monday “to enable a comprehensive assessment of the situation following a bomb threat for the second day in succession.” “The closure of the campus will enable the Administration, staff and Student Leaders to review the situation and enhance preventive and responsive measures for such threats,” the sole national higher education institution said.

Police and fire fighters reportedly conducted a thorough search of the campus on Wednesday afternoon. “No explosive of any kind or suspicious object was found during this search,” UG said.