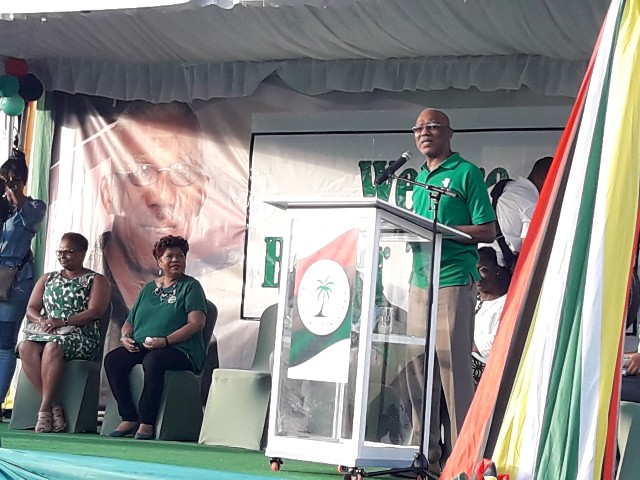 President David Granger on Sunday vowed not to resign and that government would remain in office while the controversial no-confidence motion case is appealed right up to the Caribbean Court of Justice and after the next general elections are held.

Addressing the official commissioning of his People’s National Congress’ Region 3 (West Demerara) headquarters at Vreed-en-Hoop, Granger promised that government would not violate Guyana’s constitution. He said the judicial process would be followed “until we have exhausted, satisfactorily, I hope, every element and aspect of the law.”

Granger said Parliament has not been dissolved and the National Assembly “still has work to do” but he did not elaborate.

The High Court last week did not grant a stay of its decision and a conservatory order after ruling that the no-confidence motion was validly passed on December 21, 2018 by a vote of 33 to 32, instead leaving that to the Court of Appeal.

While the opposition People’s Progressive Party (PPP) has intensified calls for the President and Cabinet to resign and make way for general elections within the stipulated 90 days since the no-confidence motion’s passage, Granger on Sunday maintained that his administration has not flouted the law. “We are a legal, legitimate government. Nothing, that we have done so far is outside of the law and as far as I am President nothing that we will do will be outside of the law,” he said.

Despite last week’s decision by the Chief Justice, Roxane George-Wiltshire, that the no-confidence motion was validly passed and that the President and Cabinet should have resigned immediately, Minister of State Joseph Harmon said “there is no restriction on the work of the government”.

Meanwhile, Harmon deemed “premature” United Nations Resident Coordinator in Guyana Mikiko Tanaka’s call for the government to respect the High Court’s decision. “I thought that was a premature statement unless there is some evidence of it.” Asked whether he believed Tanaka’s comments amounted to meddling in Guyana’s internal affairs, Harmon added that, “I wouldn’t take it that far but I would say that it’s a statement I believe has no basis right now because as a government we have always respected the constitution, we have always respected the law and so there is no need for a warning at this point in time as far as I’m concerned,” he said.

Tanaka has called on the Granger-led administration to respect Guyana’s constitution and the Court’s decision. “The delivery of the decisions by the Chief Justice demonstrates the independence and integrity of the Judiciary in protecting the Constitution and upholding the rule of law. The Honourable Speaker’s earlier validation of the process of the controversial voting at the National Assembly was testimony of the integrity of the legislative arm of the State.”
“It is hoped that the third arm of the State, the Executive, will demonstrate its integrity and respect for Guyana’s Constitution and the Judiciary that constitute the foundation for the rule of law,” Tanaka said.

Granger and Harmon sought to excite political emotions saying that one vote – a clear reference to the vote by then government parliamentarian Charrandas Persaud in favour of the opposition sponsored no-confidence motion – has displaced a government that attracted 207,000 votes at the May 2015 general elections.

The PNCR Leader added that 6,000 persons are equivalent to one parliamentary seat but one seat has impacted on the mandate given by 207, 000 persons.
“There got to be something undemocratic about that. There got to be something cruel and callous about that, that you don’t consult with your constituents, that you don’t consult with your leaders. Yuh just jook, stab yuh in de back! He appealed to party faithful to return the coalition to office. “But Comrades, residents of Region 3 you elected us to do a job. Let us finish the job. You didn’t elect Bharrat to do the job, you didn’t elect Irfaan to do the job. Give us a chance to finish the job,” Granger said.
The President politely declined to shake hands and was driven directly to and from the new PNCR regional headquarters instead of mingling with supporters along the route because of health reasons as he is prone to contracting infection at this stage of his chemotherapy treatment for non-Hodgkin’s Lymphoma, a type of blood cancer. “You know I can’t shake hands,” he told a few supporters who extended their hands as he was about to enter his car. Bodyguards formed a cordon around Granger also told persons that Granger was not shaking hands.

However, he sounded very energetic in a 36-minute speech that was punctuated by him poking fun at People’s Progressive Party (PPP) presidential candidate Irfaan Ali’s absence and his inability to enter Canada.

“Where is Irfaan? Why isn’t he here to meet me? He doesn’t know what’s going on at Vreed-en-Hoop. The ground is moving from under his feet,” Granger said. Region Three -West Demerara/ Essequibo Islands is a traditional PPP stronghold.
The Guyanese leader sent clear signals that he would not be stepping down and that he would again be the presidential candidate for A Partnership for National Unity+Alliance For Change (APNU+AFC) coalition. “I’m the man with the plan”, he said. “This is not about David or Irfaan. It is about the future of our children. It is about whether they can grow up in a democratic State. It is whether they could enjoy the quality of life that we promise them. It is whether the APNU+AFC is the machine to deliver that quality of life,” Granger said.

President Granger credited his administration with increasing pensions and salaries as well as providing free transportation to school children.

Stressing the importance of APNU and AFC sticking together, the President called on party supporters to ensure everyone in West Demerara is registered and they are mobilised countrywide as a demonstration of the coalition’s strength.