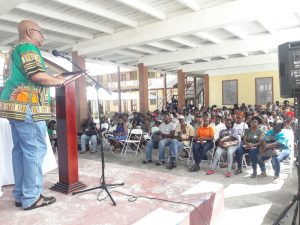 Noting that the minimum wage is now GYD$64,000 up from GYD$39,000 in three years, and the take-home pay is about GYD$55,000, Jordan acknowledged that “it can’t do” and “the minimum wage was never designed to pay you for your whole life”.

Addressing about 200 attendees at a one-stop shop business fair organised by the International Decade for People of African Descent Assembly-Guyana (IDPADA-G), the minister called attention to the availability of GYD$250 million in grants through the Sustainable Livelihood and Entrepreneurial Development (SLED) which is managed by the Ministry of Social Protection. “Therefore, what we have to do as Africans and Guyanese generally is to turn that little entrepreneurial spirit into ever increasing and ever widening activity,” he told the event that was held at Dolphin Secondary School in Georgetown.

He indicated that SLED could finance the purchase of grass-cutters, carpentry tools, sewing machines and other items for individuals as a means of reducing dependency on the public service. “We have to step away from this business that the only work is in the public service. There is a lot of poverty in the public service because we will not overnight be able to pay people the money that they may be due,” said Jordan.

Jordan, a former Budget Director at the Ministry of Finance, noted that Afro-Guyanese are vulnerable to retrenchment if the economy flounders and Guyana has to seek assistance from international donors and lenders.

On the thorny issue contract awarding, the Finance Minister said new entrants first have to demonstrate that they have the capacity. “Many of you complain that the same people getting jobs, the same people like in the last 23 years getting jobs. A fair complaint, but wait a minute, what have you yourselves done to ensure that you can get jobs? We just can’t hand a job to you. The other side will holler discrimination and so forth. We have held a number of clinics and so forth around the country but when we look at it carefully, to do a job requires you to get a bond, to do a job requires you to fill up a whole set of jobs and requirements and so forth. Many of you find these to be very challenging and so I urge that the help desk be set up so that you can be guided right through the process, right through until the tender is deposited,” he said. Jordan recommended that small contractors who earn no more than GYD$60 million annually bid for jobs.

Before the end of the event, about 500 persons took advantage of small business offerings, processing of passport applications, birth certificates, and house-lot applications.

Jordan brushed off concerns in some quarters that the authorities have been hassling vendors who sell on parapets or obstructing traffic.”The first thing we have to recognise is that to make a living, we must try to make it within the confines of the law and we must try to understand that whatever we do, has an effect on some other set of people,” he said.

The Finance Minister, who is a Guyana- and United States-trained economist, urged the gathering to remember that “whenever you are your own boss, you are responsible for your own destiny” to create wealth and secure economic independence.