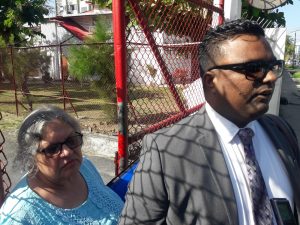 The Guyana Elections Commission (GECOM) on Tuesday asked the Chief Elections Officer to come up with timelines for holding the next general elections before the Commission could meet with the opposition and government representatives and inform them of its readiness.

The three Opposition People’s Progressive Party/Civic (PPP/C)-nominated election commissioners, Robeson Benn, Sase Gunraj, and Bibi Shadick told reporters that GECOM’s administration headed by Chief Elections Officer Keith Lowenfield, now has to provide a report on certain things to be done to be ready for the polls.

“What did happen today was that the Chairman suspended the agenda and allowed for the questions relating to GECOM’s readiness for elections,” Benn said. He added that Lowenfield is “mandated to bring the various situations or scenarios, tasks and materials needed to advise on the readiness for elections.” Shadick explained that the components are expected to include the “longest possible time or shortest possible time” for certain things to be done. “That is what will inform the stakeholders as to how long GECOM needs, the shortest possible time that GECOM needs in order to bring off the elections,” she said. Demerara Waves Online News was told the components could include staffing, statutory deadlines, and acquiring materials.

The Commission is expected to meet again on Thursday to discuss the various timelines before government Chief Whip, Amna Ally and Opposition Chief Whip, Gail Teixeira meet with the Commission’s Chairman, the result of a meeting between President David Granger and Opposition Leader Bharrat Jagdeo earlier this month.

Talk of elections earlier than August 2020 is as a result of the last month’s controversial parliamentary passage of the no-confidence motion by 33 to 32, but already the seven-member electoral body is split over first holding house-to-house registration. Guyana’s constitution states that on the passage of the no-confidence motion, general elections should be held within 90 days – in this case by March 21, 2019 or at another date to be approved by at least two-thirds of the National Assembly.

The PPP Commissioners maintain that the current list of registrants is valid until April 30, 2019 and could be used to hold general elections this year. “I don’t think that [house-to-house registration] can be accommodated before election. If that has to be accommodated, then we are saying to the constitution go wherever you want. We are doing whatever we want. The thing is that these are abnormal circumstances so we have to deal with in a different but professional way,” Shadick said.

However, GECOM’s government commissioners Vincent Alexander and Desmond Trotman insist that the list is bloated with the names of deceased and other persons. In making a case out for fresh house-to-house registration to be held before the next general elections, Alexander cautioned that the existing list of about 500,000 persons in a country where there are 740,000 persons opens up the process to skulduggery. “In my view, that allows for the elections to be corrupted in the sense that political people can use the excess to manipulate voting and have a result which is not reflective of the resident Guyanese so we need to deal with that and I go further to say that whether it’s an emergency election or a routine election, one needs to have the best voters’ list and since we don’t have the best voters’ list it’s not an issue that we can ignore at this point in time,” said Alexander, a long-serving elections commissioner.

GECOM officials have said that house-to-house registration for which GYD$3 billion has been budgeted in 2019 could take about six months. 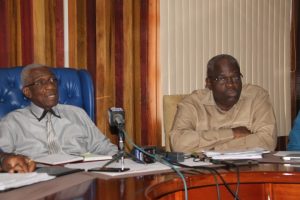 Trotman stressed that having a fresh voters’ list was key to legitimising the electoral process and eliminating the likelihood of political factions rejecting the results. “For me, the one way… you can guarantee that you can cleanse some of the impurities that exist on the present list is by doing a new house-to-house registration and if you do that, you may very well have at the end of the elections a result that almost all of the society will find acceptable,” he said.

Asked whether there were not sufficient safeguards against manipulation of extra names on the voters’ list, Alexander prefers to be cautious. “My own involvement in the political landscape tells me that I need to err on the side of caution,” said Alexander who is a former executive member of the People’s National Congress Reform (PNCR).

Trotman, a longtime member of the Working People’s Alliance (WPA), rejected suggestions that he was being manipulated by the government to delay holding of elections.

Meanwhile, Chief Justice Roxane George-Wiltshire is expected, before the end of January, to hand down her decisions on three related cases on the validity of the vote for the motion based on whether 33 or 34 votes constitute an absolute majority in the 65-seat National Assembly. Canadian citizen Charrandas Persaud was constitutionally selected to be a candidate and sit in the National Assembly, and it is felt that he should have informed the House Speaker Dr. Barton Scotland that he had no longer supported the list of candidates from which he had been selected.