Ending months of speculation about who was his preferred pick for the presidential candidacy, General Secretary of the People’s Progressive Party (PPP) Bharrat Jagdeo Sunday evening admitted that he had all along had his eyes set on Irfaan Ali who was elected one day before.

Addressing what he called a “spontaneous” political meeting at Ali’s home-village in the PPP heartland of Leonora, West Coast Demerara, Jagdeo disclosed that he toiled for the 38-year old man to lead their party into the next general elections. “In this period I work to make Irfaan Ali a more successful president, so what’s wrong with that? He is my friend and he is a member of the party, a longstanding and a valuable member of the party. All my skills, every single bit of it will be at his disposal for Guyana and for the future of all of our people and I don’t have any apology to make for that, no apology whatsoever,” he said.

For weeks, Jagdeo had dodged questions from the media about whether he had preferred Ali for the top job.

He credited Ali with being trained in economics, unlike President David Granger, having the experience to deliver huge projects such as housing and not requiring advisors to go into talks. Granger has absolutely no skills in the economic arena to direct people to work on large-scale projects. He [Ali] has had that experience of working on large-scale projects and delivering results.

You need a president who not only could talk a good name and make a good speech. You need a president who would sit in that office when all the glamour disappears and work day and night to improve people’s lives and Irfaan Ali can do that. That is what is important to me and the PPP,” said Jagdeo of Ali, the opposition Shadow Finance Minister.

In turn, Ali reiterated that Jagdeo is the PPP’s “greatest asset” who has broadened the party’s reach. “As the presidential candidate of this party, I would be foolish, as the leader of any other organisation, to have your greatest asset and not utilise it to the fullest so I commit to you tonight that this great asset that the party has will be utilised fully so that the transformation, the modernisation, the growth and development of Guyana can recommence at an accelerate pace,” Ali said. He also praised the other contestants for the presidential candidacy.

Calling the process that was used by the 35-member Central Committee “transparent” for selecting the presidential candidate on Saturday, Jagdeo called on party faithful to accept the results of 23-12 between Ali and Attorney-at-Law Anil Nandlall. “We can only select one person to lead us as the presidential candidate, and all the others, as valuable as they are, have to understand that and they understood it and they accepted it and we in the person must do the same,” said Jagdeo, who is also Opposition Leader in the National Assembly.

Except for PPP executive member, Gail Teixeira, who pulled out of the race for the presidential candidacy, none of the others – Nandlall, Frank Anthony or Vindhya Persaud – were seen at the meeting that was attended by about 600 persons.

Since Ali’s election as the PPP’s presidential candidate, Facebook has been alight with condemnations and criticisms of the former Minister of Housing, Water, Tourism, Industry and Commerce, largely concluding that he was the wrong choice and forecasting that the governing A Partnership for National Unity+Alliance For Change (APNU+AFC) would regain power. “When you go on Facebook, you see a lot of negatives. Ignore those. Already, they are dropping,” he said, adding that the government’s propaganda machinery was at work. Jagdeo appealed to PPP supporters not to pay attention to those criticisms. “You are going to hear all kinds of silly, outrageous things and you just have to ignore them and move on,” he said. 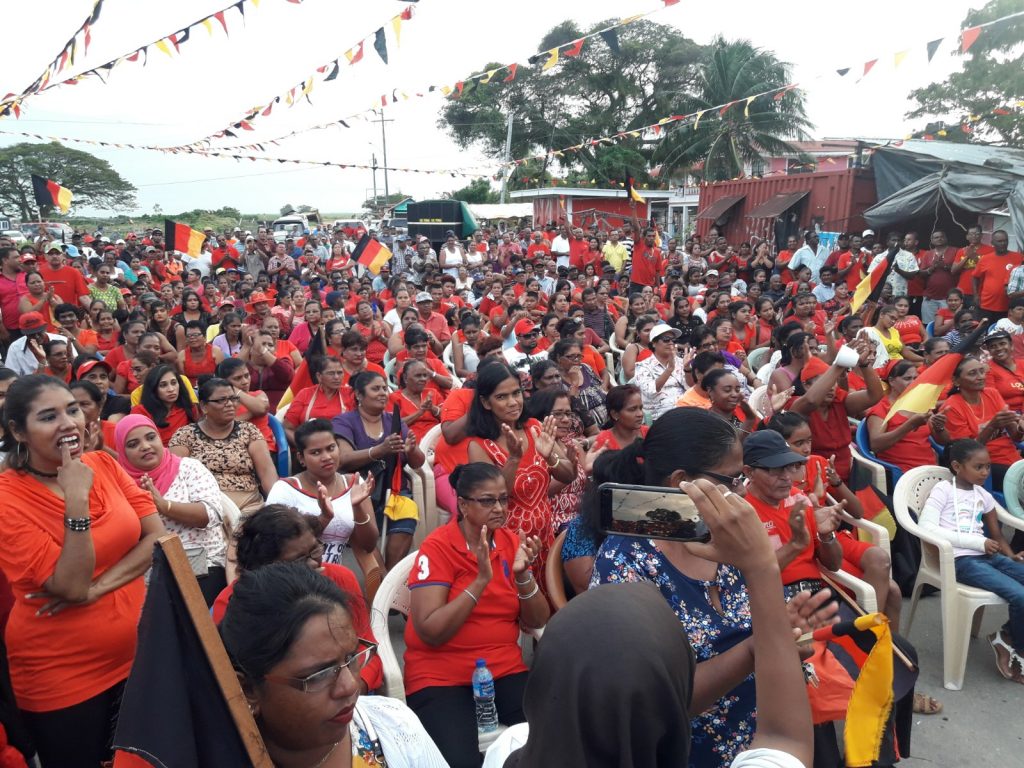 A section of the attendees at the PPP public meeting, Leonora Public Road, West Coast Demerara.

Jagdeo stayed clear of whether Ali’s academic qualifications are authentic, but referred to the land-sale fraud charges against the presidential candidate totalling GYD$174 million, as politically trumped up.

The PPP General Secretary noted that Ali’s critics were also raising concerns about the candidate’s Islamic faith, but said that was not an issue because the party’s programme would be implemented for all Guyanese regardless of race or religion.

Jagdeo accused the David Granger-led administration of bypassing the youths after the 2015 general elections and were again seeking to woo them with public fora on oil and gas, meeting deejays and offering them free cash and other goodies. “All the young people they have neglected are suddenly important. They had no space in the government for three and half years,” Jagdeo said.

Lashing back at revived allegations that he and the PPP had presided over the killing of about 400 Afro-Guyanese, and rampant drug trafficking and corruption, Jagdeo charged that his party had solid evidence on corruption by the incumbent administration. “We have the evidence, not rumours,” he remarked.