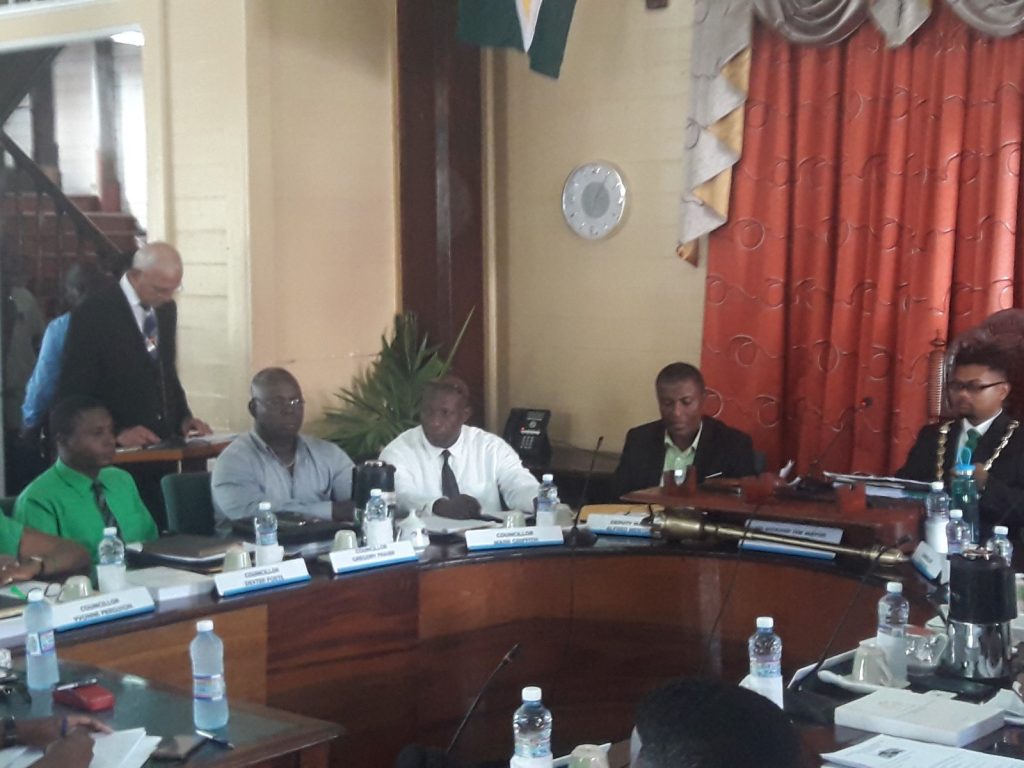 Local Government Minister, Ronald Bulkan on Monday called on the newly-elected councillors of Georgetown to guard against a repeat of alleged mismanagement, and instead, ensure transparency and accountability in managing the City’s affairs.

In an apparent reference to recommendations that City Hall’s financial records be audited each year and concerns by the Retired Justice Cecil Kennard Commission of Inquiry into the municipality’s administration, the minister announced that his ministry would spearhead the formulation of a code of conduct and annual auditing of the Council’s financial records. “The Ministry, in partnership, with relevant stakeholders craft a code of conduct for administrative officials such as Town Clerks, fine-tune procurement procedures, guidelines for treating with council’s assets in accordance with the Municipal and District Council’s Act,” Bulkan said in his address to councillors at the inauguration ceremony for Mayor Ubraj Narine. Bulkan promised that the Ministry of Local Government would liaise with the Council to ensure that “going forward that your account is audited yearly” in keeping with the law.

The inquiry found that substantive Town Clerk, Royston King, who is on administrative leave, had not been authorised by the Council to lease a wharf that is State property to the National Industrial and Commercial Investments Limited.

Bulkan told the councillors, several of whom were members before the November 12, 2018 Local Government Elections, to plan and be accountable to ensure limited resources are properly spent. “Recent events have proven that the work of the entire Council, whether good or bad, is brought into disrepute in the absence of checks and balances. Strict monitoring will ensure value for money, accountability and transparency. Citizens must not only hear, as an achievement that X sum or Y sum was expended but more importantly the value and effectiveness of each expenditure undertaken by this council and it must be felt by the ordinary person,” Bulkan told the Councilors, top officials of the City administration and special invitees including Chairman of the Local Government Commission.

“The role of the Finance Committee, in this regard, cannot be overstated from the time of conceptualisation to procurement as well as the execution of programmes”, Bulkan stated. The Finance Committee includes former Mayor Patricia Chase-Green and Oscar Clarke who had been piloting the now suspended controversial parking meter project that had sparked weekly protest outside City Hall. The central government is yet to green-light the recommencement of metered parking.

In a country where the central government is elected through a system of proportional representation, the Local Government Minister underscored the importance of the constituency system that was responsible for electing 50 percent of the councillors. Bulkan called on the constituency councillors of Georgetown “to reconnect with the citizens and all stakeholders”. “You form a direct link between the Council and the residents and can be an important channel for the garnering of feedback that may assist the identification and effective implementation of the Council’s work-programme. In this era of people’s empowerment, it is time that we capitalise on this type of direct leadership and representation. You are better positioned to represent the interest of your constituents at this horseshoe table if you engage with those constituents,” said Bulkan, the Treasurer of the People’s National Congress Reform (PNCR) who has long touted the importance of the proportional representation system.

“Constituency councillors must, therefore, be more visible, more engaged and more proactive. The interest and welfare of all stakeholders should be incorporated into Council’s plan,” he added.

The PNCR-dominated A Partnership for National Unity (APNU) has admitted that its poor showing at last year’s Local Government Elections was partly due to political neglect of a number of its strongholds. That party has since promised to do better.

With relations having been soured with the business community in Georgetown largely due to the parking meter project and the introduction of shipping container fees, the Local Government Minister called on the new council to patch up that relationship. “A rethink of relations with the business community should also be pursued. In this regard, the Ministry stands ready to facilitate a resuscitation of the tripartite committee established to promote dialogue between the Council and the private sector. The Council should seek to ensure an investor-friendly climate by taking steps to reduce unnecessary delays in the issuance of building permits,” he said.

Among the priorities for the new council, according to the minister, should be illegal vending and its proliferation, drainage, security, solid waste management, squatting on municipal reserves, zoning, among others. “Grappling with these and other issues and satisfying the expectations of citizens is not an easy task given the limited financial resources that I believe are at your disposal,” he added.

He stressed the importance of inclusive planning.