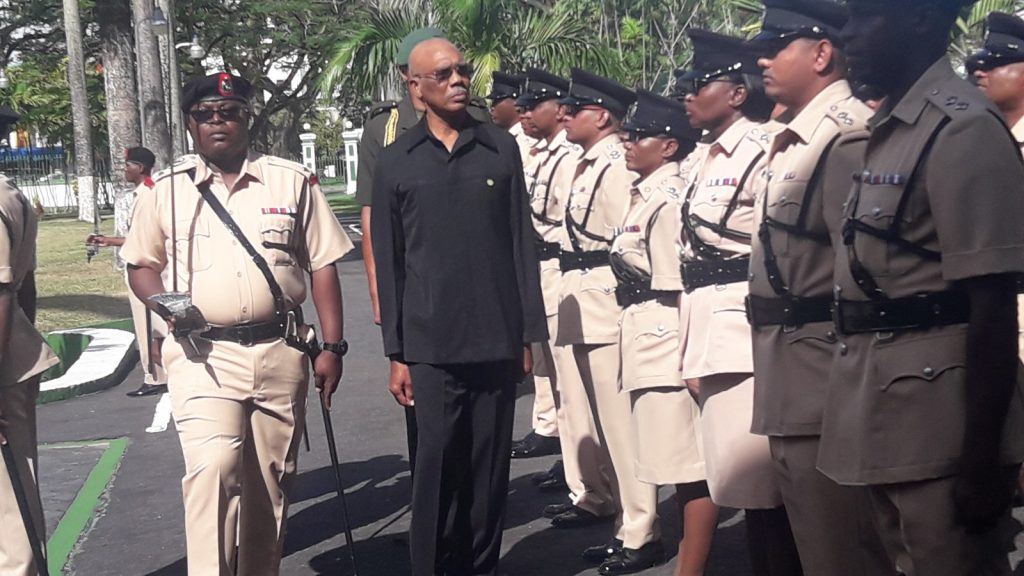 Addressing the opening of the 2019 Police Officers’ Conference at State House, the Guyanese leader noted that the police force is “distributed very unevenly” across Guyana with 73 stations and 26 outposts and a shortage of manpower that has to be increased.

“The force’s membership of about 4,600 is inadequate and needs to be augmented,” he said, noting the country has 3,000 kilometres of borders, 460 kilometers of seacoast, and the Force “is challenged to maintain security effectively everywhere”.

In the area of human resource development, the Police Commissioner said emphasis was being placed on recruitment and training but he could not immediately say how many more persons are needed to boost the force’s strength. “At this point, we don’t have a figure but based on the inadequacy, we’ll examine it and whichever is the need, we’ll pursue that,” he said.

The Police Commissioner said the police force is by the end of 2019 expected to complete the implementation of a decision for the force to manage the country by having a Commander for each administrative region. In that regard, the President said that is expected to ease discomfort for Commanders for a number of regions whose offices are based at the Police Headquarters. “Police divisions are being restructured to correspond to governmental regional divisions. Commanders for regional divisions will no longer be forced to endure the urban discomfort of Eve Leary (the location of the Police Headquarters) but will be able to live and work in the more pleasant hinterland regions,” he said.

The President said the British Security Sector Reform Report has recommended a number of measures to address chronic under-funding, lack of adequate planning and low standards, reverse record of poor maintenance and abuse of moveable and immoveable assets, and ensure promotions are based on hard work, integrity and merit.

He highlighted that systems such as the Police Service Commission and the Police Complaints Authority have been made as part of efforts to ensure the force has a high quality of staff and weed out corruption, all aimed at increasing public trust.