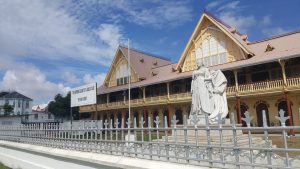 The High Court was Friday asked to quash a no-confidence motion against the Guyana Government on the grounds that former government parliamentarian, Charrandass Persaud, who sided with the opposition to pass the motion had falsely declared that he was a Guyanese citizen, but immigration records show that he has been a Canadian citizen since 1998.

In the complaint filed by Compton Herbert Reid, through Senior Counsel Rex McKay’s Chambers, Reid asked the High Court to suspend the Resolution that states the no-confidence motion was passed 33-32 on December 21, 2018 until the case is heard.

“The applicant makes an application for an order staying the enforcement of Resolution No 101 declared by the Clerk of the National Assembly to have been passed in the National Assembly on December 21st, 2018. A conservatory order, preserving the status quo ante that the government remains in office until the hearing and determination of the reliefs sought herein,” states court papers that were filed at the High Court Registry at 2:29 pm, one minute before closure.

A date has to be fixed for the case to commence.

House Speaker, Dr. Barton Scotland on Thursday declined to reverse his ruling that the motion had been passed and instead said the issues challenging its validity should be settled by the Court.

The applicant’s request for a stay comes against the background of a 90-day constitutionally prescribed period within which general elections have to be held after a no-confidence motion is passed. Scotland had hoped that the country’s top political leaders would have already met. President David Granger has since agreed to hold talks with Opposition Leader Bharrat Jagdeo on Wednesday, January 9 at 11 am at the Ministry of the Presidency.

In the application, Reid also wants the High Court to declare that on April 7, 2015 Persaud was disqualified from being nominated a member of Guyana’s National Assembly and that his nomination “is invalid, null and void and of no legal effect”. Against this background, Reid states that contrary to Guyana’s constitution Persaud bears allegiance to a foreign power based on his oath of Canadian citizenship and he was not qualified to sit in Guyana’s National Assembly and vote.

Relying on evidence from Guyana’s immigration department and Canada’s immigration authorities, Reid states that Persaud’s latest Canadian passport was issued on October 25, 2017 and he has held valid Canadian passports since 1998. Other documents the applicant intends to rely on are an affidavit by the Deputy Chief Immigration Officer, Ewart Wray, Persaud’s statutory declaration and a nomination form, a letter from the Clerk of the National Assembly dated December 24, 2018, a certificate on Resolution Number 101 signed by the Clerk of the National Assembly and an affidavit of Canada-based Guyanese Attorney-at-Law, Selwyn Pieters.

The High Court is being asked to find that Persaud’s ‘Yes’ vote for the no-confidence motion is not valid and that indeed the count was 32 for and 32 against which did not amount to a majority of all the elected members of the National Assembly and that “the motion of no-confidence is null, void and of no legal effect to defeat the government on a vote of no-confidence” in keeping with Article 106 of the constitution.