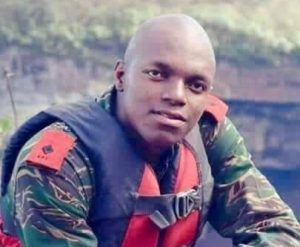 The man, who allegedly stabbed and killed a Guyana Defence Force (GDF) soldier, on Wednesday surrendered to police in the company of his lawyer, the police force said.

The man, only known as ‘Son’, walked into the Whim Police Station in the company of Attorney-at-Law Chandra Sohan.

Guyana Defence Force Lieutenant Mark Bagot, 24, was stabbed in the region of the left side of his chest at about 9:45 am on December 30, 2018 in a shop in his home village at Phillipi, Corentyne, Berbice.

Bagot succumbed to his injury at about 1:30 pm on December 31st at the New Amsterdam Public Hospital.

Investigation revealed that the victim and suspect were imbibing at a shop when an argument ensued over the purchasing of a bottle of Guinness for the suspect by the victim,” the Guyana Police Force has said.

Investigators were informed that as a result of the argument, the two men scuffled and the suspect, who is known as ‘Son’ whipped out a knife and stabbed the GDF officer.

Bagot was rushed to the Port Mourant Hospital, treated and transferred to the New Amsterdam Public Hospital where he died while receiving medical attention.