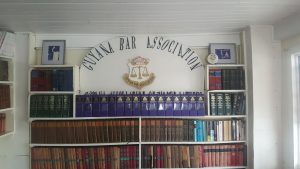 The Guyana Bar Association (GBA) Wednesday night urged Guyanese to ignore Attorney-at-Law, Nigel Hughes’ calculation that 34 of the 65 votes in the National Assembly are needed to pass a no-confidence motion, even as checks in other countries show that an absolute majority is more than 50 percent after rounding up half a percent.

“The Bar Council rejects as erroneous such contentions that the motion was not properly passed or that the vote is, for any reason, invalid,” the GBA said.

The GBA called on the Guyana government to adhere to the outcome of the vote 33 (for) to 32 (against) and prepare to hold general elections by March 19, 2019 on the expiration of 90 days from December 21, 2018 when the motion was passed.

“The Bar Council urges that the results and consequences of the motion be accepted and that urgent preparations for elections by the Elections Commission be started,” the GBA added.

Noting that the vote has been accepted, but the government and the President, and the GBA cautioned that if anything is done to derail the constitutionally laid down time-frame in light of the majority approval of the no-confidence motion. “The giving of effect to any contentions that there is some possibility other than elections being held within 90 days of the passage of the motion could lead to instability and our democracy must be protected by the unambiguous adherence to the rule of law and to the provisions of Article 106(6) of the Constitution,” the Bar Association added. 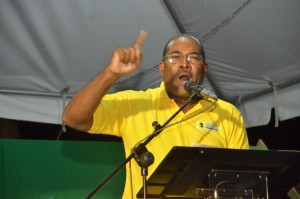 FLASHBACK: Attorney-at-Law, Nigel Hughes on the campaign trail when he was Chairman of the Alliance For Change.

After the governing A Partnership for National Unity+Alliance For Change (APNU+AFC) lost the vote last Friday and Prime Minister Moses Nagamootoo and President David Granger indicated that the effect of the motion’s passage was fresh elections ahead of  the otherwise constitutional deadline of August 2020, Attorney-at-Law Hughes cited two cases in Anguilla and Vanuatu to support his contention that 34 instead of 33 parliamentarians should have voted to secure the passage of the motion.

Hughes said since half of the 65 members of Guyana’s National Assembly is 32.5 then that number should be rounded “down” to 33 and then add one. He is backing his argument with a 2011 Vanuatu Court of Appeal ruling in a case on a confidence vote in Vanuatu, that the absolute majority of the 52-member parliament there is half (26 votes) plus one to total 27 votes. In that vote, the Speaker had abstained.

The Caribbean Court of Justice (CCJ), of which Guyana is a member, identifies three layers of voting in Guyana: an absolute majority, a two-thirds majority and a referendum. Referring to certain amendments to the constitution and passage of a no-confidence motion, Guyana’s constitution says the vote in such matters must be by a “majority of all the elected members” of the National Assembly.