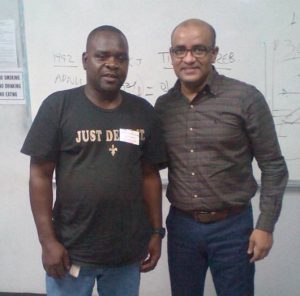 The Deputy Chairman of the main opposition People’s Progressive Party (PPP) in Linden, Akanni Blair has decided to join A New United Guyana (ANUG), less than three days after it announced its existence.

Blair confirmed his move in an interview with Demerara Waves Online News, saying that while the governing David Granger-led coalition was not expected to win the next general elections, he is worried that if the PPP wins again the country could end up being a one-party state like Cuba if there is no constitutional reform.

“I’m looking at the current dynamics and when I look at the possibility of a real chance that the third force is going to make a lot of sense in the current environment because when you listen to the people on the ground, people really do not want to go back to the PPP but the Granger administration is not something people are going to go back with and given that situation, people are asking for something fresh,” he told Demerara Waves Online News.

Blair, who said he has been voting for the PPP since 1992 and became a card-bearing member of that party in 2011, said he admires ANUG’s priority on reforming Guyana’s constitution and does not mind if the the newly-formed party holds the balance of power in the 65-seat National Assembly. “It [The PPP] victory wouldn’t be comfortable. They are going to end up possibly with a minority government again and that would be a more comfortable situation,” he said.

Asked how that would be better for Guyana if the government is beset by gridlock, Blair said if ANUG has a “stake constitutional reform would be a reality.” “I believe that the time has come for us to show political maturity and I don’t think that gridlock would be an issue. We are at a stage right now where the country needs unity and I think they are heading in the right direction,” said Blair, a contractor.

He is not concerned that the PPP would expel him before he resigns and throws his full weight behind ANUG whose top brass include former House Speaker Senior Counsel, Ralph Ramkarran; former government minister and political scientist, Dr. Henry Jeffrey; Attorney-at-Law, Timothy Jonas and prominent city businessman Terrence Campbell.

Acknowledging that the PPP is “already a dynamic force”, Blair said the PPP would eventually beat a coalition and Guyana could end up being a one-party state.

ANUG has publicly committed that it would not coalesce with either the PPP or the People’s National Congress Reform, but would instead push for constitutional reform and inclusive governance to manage the country’s oil wealth that is expected to begin pouring in from late 2019 or early 2020.

ANUG executives said they would use the APNU+AFC model of constitutional reform as a starting point. That promise entails separate presidential elections, the prime minister coming from the party obtaining the second highest votes, and each party securing 15 percent or more votes to have a share in the Government.