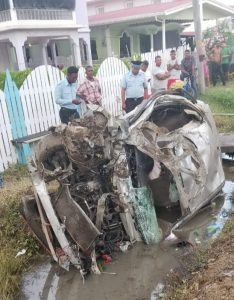 A youth died in an early Wednesday-Boxing Day-morning road accident on the Corentyne Public Road when the car in which he and a young woman were travelling slammed into a refrigerator and rolled over several times, police said.

Dead is the car driver Reoul Drepal-Saul, 20, while the occupant 18-year old Akesha Beaton has been hospitalized in a serious condition. They are from Number 51 Village, Corentyne. 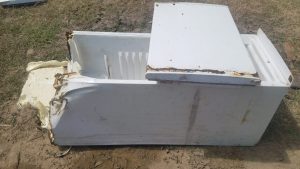 The refrigerator that the car struck.

The motor car, PVV 1120, driven by Drepal-Saul, crashed into an abandoned refrigerator that was on the #59 Public Road, Corentyne, Berbice at about 06:40 Wednesday morning.

Police were told  that the car was proceeding north along the western carriageway of the road when it collided with the refrigerator.

“As a result of the impact, the driver lost control of the vehicle which reportedly rolled over several times before it came to a halt in a western drain,” the Guyana Police Force said.

Drepal-Saul and Beaton were first taken to the Skeldon Public Hospital where they were treated and transferred to the New Amsterdam Hospital.