Britain, Caricom join US in telling Venezuela to back off from Guyana’s territory 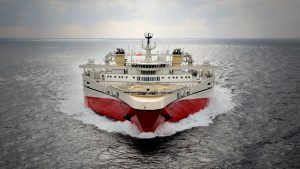 Even as Venezuela scolded the United States (US) not to push its mouth in the Guyana-Venezuela border controversy whose latest spat are over allegations of a maritime incursion by ExxonMobil contracted seismic data collection ships, Britain and the 15-nation Caribbean Community (CARICOM) backed Guyana.

“The rule of law must be respected and those who have the legitimate permissions to operate and undertake their activities must be allowed the do so,” Britain’s High Commissioner to Guyana, Greg Quinn told Demerara Waves Online News.

Britain is the second major Western superpower to have in recent days come out strongly in favour of Guyana, after  Venezuela’s Navy last Saturday morning attempted to land a helicopter on The Bahamas-flagged Ramform Tethys, a seismic research vessel that ExxonMobil hired from the Norway-based Petro Geological Services to gather data from the western end of the Stabroek Block. Venezuela, on the other hand, said the seismic ship and a Trinidad and Tobago-flagged support vessel had been well within its maritime space in the Orinoco River Delta area over which it has “undisputed sovereignty”.

High Commissioner Quinn, like the US, stated that “the UK (United Kingdom) is clear that the 1899 Arbitral Award settled the border between Guyana and Venezuela. We support the ongoing work of the UN Secretary General.”

The Venezuelan military exited the area and the ships have since moved further east.

CARICOM, for its part, expressed grave concern about Venezuela’s incursion into Guyanese maritime space. “Such acts violate the sovereign rights of Guyana under international law, its entitlement to a territorial sea, Exclusive Economic Zone and continental shelf, and pose a threat to Guyana’s economic development and national security,” Caricom said in a statement Monday evening.

The Caribbean Community reiterates its full support for the sovereignty and territorial integrity of the Cooperative Republic of Guyana, including its right to peacefully explore and exploit its onshore and offshore resources,”  Caricom said.

In its latest position on this most recent border spat, Venezuela Vice Minister of Foreign Affairs (North America), Carlos Ron “emphatically rejected” the US’ position, suggesting that it was grounded in its support for ExxonMobil. “Instead of trying to ignite conflicts between peaceful neighbours in the name of business interests, the US government should, for the first time, respect international law and Venezuelan sovereignty. Take care of your own problems,” he was quoted by the Foreign Ministry in Caracas as saying.

The incident, according to Guyana, occurred at a position of N 09 deg 17.19 min / W 058 deg 16.20 min at about 140 kilometres from the nearest point to the provisional equidistant line with Venezuela.

Venezuela has so far refused to enter a substantial appearance before the International Court of Justice to settle the controversy over the 1899 Arbitral Tribunal Award that Guyana has historically maintained settled the land boundary between the two countries. Instead, Venezuela wants the matter to be dealt with bilaterally through mediation, a 50-year old process that Guyana has said has failed.