The architects of the just-formed New and United Guyana (NUG) political party have identified “inclusive governance” and constitutional reform as their priority, while vowing that they would not coalesce with either of the two major political parties to take up seats in government.

They cited the need for inclusive governance as Guyana prepares to become a major oil producer in the Americas from late 2019 or early 2020. “With the experience of two unstable governments, the continuation of the internecine discord reflective of ethno-political disputes and need for a higher degree of political unity to deal with the enormous and urgent problems of devising systems and structures to cope with and manage the new petroleum industry, we believe that the urgent necessity to reform governance mechanisms to reflect inclusive governance is self-evident and is the most urgent issue now facing the Guyanese people,” the quartet said in their NUG statement.

Their call for a national unity mechanism against the background of earning billions of dollars from oil production comes sharply on the heels of signals by Opposition Leader Bharrat Jagdeo for the PPP, People’s National Congress Reform and the Alliance For Change to explore governance options.

The NUG pledged that they would not coalesce with any other political party to get into government opportunistically.  “We would like to assure the Guyanese people that, if we do not secure a majority or plurality of votes at the elections, under no circumstance will we ever join in a coalition with either of the major parties to sustain it in office or for ourselves to gain political office or positions,” the four executive said.

They said in a joint statement that they were prepared to sign a political agreement that would allow Guyanese to sue them in a court of law if they coalesce with any other political party.  “We will offer to make this promise justiciable so that if we violate it we can be taken to court,” they said against the background of the Alliance For Change (AFC) promising that it would never have done so or it would have become “dead meat”.

Eventually, the AFC had made an about turn and teamed up with the People’s National Congress Reform (PNCR)-controlled A Partnership for National Unity (APNU) in February 2015 and together they won the general elections three months later.

Ramkarran, who resigned from the  PPP in 2012 over corruption issues in that party, has a long family history in politics; his father, Boysie Ramkarran, having been a key figure in the Cheddi Jagan-led PPP in the 1950s and 1960s. Jeffrey was also a senior official and socialist ideologue in the Forbes Burnham-led People’s National Congress (PNC).  Campbell was a key figure in a non-governmental pressure group named RISE that had set  constitutional reform as one of its major targets.

Describing themselves as  “four Guyanese concerned citizens”, Ramkarran, Jeffrey, Jonas and Campbell said they had been talking for most of 2018 after it became evident that the APNU+AFC governing coalition had failed to reduce decades-old divisions and deliver on its promise to overhaul Guyana’s constiution.

The NUG executives said they would use the APNU+AFC model of constitutional reform as a starting point. That promise entails  separate presidential elections, the prime minister coming from the party obtaining the second highest votes, and each party securing 15 percent or more votes to have a share in the Government. “In relation to constitutional reform, we believe that the APNU+AFC manifesto proposals are a good starting point for national debate. We will consider our own proposals at a later date and in doing so will rely on a free debate among the Guyanese people,” NUG said. 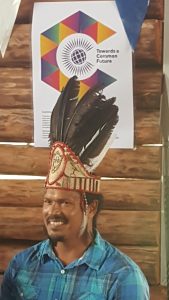 The party urged supporters of any of the existing major parties not to feel they are betraying them if they vote for NUG because the aim is to get all of them involved in running the country which has been plagued by ethno-political instability, accusations and counter-accusations of corruption and other ills. “This would be so because on our proposals, the major political parties, hopefully including our own, which are supported by the vast majority of Guyanese, will be part of the government defending their interests. Guyanese who support one of the major parties, therefore, should feel no sense of betrayal of their party of preference by supporting our Party because our struggle is to get all major parties participating in the government,’ the NUG said.

They urged all civil society organisations and other political groups and parties to support our agenda, adding that talks have begun with the Liberal and Justice Party, led by former Chairman of the National Toshaos Council, Lenox Shuman.

The NUG said it decided to announce its existence and plans now due to fast-moving pace of events, in clear reference to the PPP winning a no-confidence vote against the governing coalition and paving the way for general elections by March 21, 2019.

2018-12-25
Denis Chabrol
Previous: Govt seeks legal opinions on no-confidence motion
Next: Britain, Caricom join US in telling Venezuela to back off from Guyana’s territory