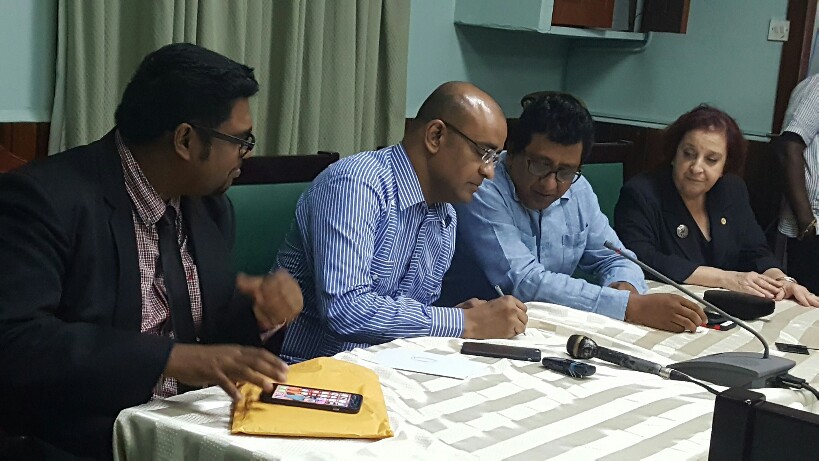 FLASH BACK: Opposition Leader, Bharrat Jagdeo (centre) flanked by PPPC parliamentarians Irfan Ali and Gail Teixeira as he announced the names of the nominees for the position of GECOM Chairman.

General Secretary of the opposition People’s Progressive Party (PPP) Bharrat Jagdeo on Monday declined to say whether he supports Shadow Finance Minister, Irfan Ali to be his party’s presidential candidate, but he did not believe criminal charges should be a factor.

“Do you think I will come to a press conference and say who I’m supporting? I’ll discuss that there within the party circles,” he said.

The PPP General Secretary said naming the candidate would be “decided shortly”, and it would be  “pure tactic” on whether to do so before or after Friday.

Political pundits inside and outside the PPP top brass believe that Jagdeo supports Ali, a former Minister of Housing, Water and Tourism, and currently Shadow Finance Minister. 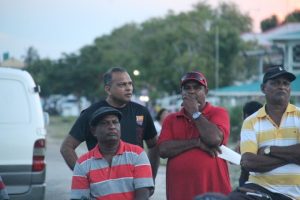 FLASH BACK: Dr. Frank Anthony (in black jersey) among Enmore residents at a PPP public meeting that was held in June, 2018 in honour of the five Enmore sugar workers who were killed by colonial police in 1948.

Jagdeo, who is Opposition Leader, said the PPP could not allow its decision on the presidential candidacy to be dictated by  criminal charges- alleged larceny against Attorney-at-Law Anil Nandlall and alleged fraud against Ali. “If we allow APNU (A Partnership for National Unity) to decide who our candidates will be, they will charge everyone of one of our potential candidates they will that. We cannot allow APNU to determine who our candidate will be,” he said.

Personally, Jagdeo said he would not be considering the criminal charges against Ali and Nandlall in deciding who he would support to lead the PPP into the next general elections constitutionally due the latest by August, 2020.

The PPP General Secretary noted that the housing lands at Goedverwagting-Sparendaam (Pradoville 2) have taken centre stage only because he resides there, in stark contrast to his allocation of five acres of land in the city to former First Lady Viola Burnham and her family “without paying a cent” and the People’s National Congress Reform (PNCR), while in government had taken almost 60 acres of land at Sophia. “Taking Irfan Ali- he is not the beneficiary but the beneficiaries haven’t been charged. He got charged and Anil Nandlall again…,” Jagdeo said.

The PPP, buoyed by a good performance in last month’s local government elections that was affected by a low voter-turnout, has been taking advantage of a number of opportunities to flex its political muscles.  These include efforts to have the Prime Minister give up his acting presidential responsibilities while he is seated in the National Assembly and the tabling of a no-confidence motion.

Prime Minister Nagamootoo has accused the PPP and Jagdeo of plotting a number of strategies to derail the passage of the 2019 National Budget and create instability in the country. The budget was passed by the National Assembly last week Friday.