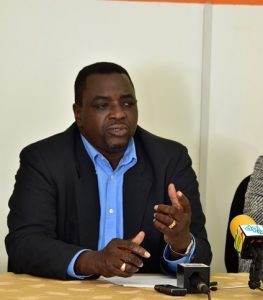 Small businesses in Guyana will from January 1, 2019 be able to access 20 percent of government contracts for  goods and services, even as government’s Small Business Bureau said they would be screened to avoid big companies from setting up small businesses to front for them.

Chief Executive Officer of the Small Business Bureau, Dr. Lowell Porter said long-established small businesses would be screened and given preference over new entities in a points system. “It’s the only way we can actually make this fair,” he said.

“We want every small business that is capable to have a bite,” he added.

He added that small businesses would be required to submit their National Insurance Scheme and Income Tax records from the Guyana Revenue Authority (GRA) when making a pitch for government contracts. “Once we have that application, we’ll try to verify if, indeed, that person is a small business, if they have submitted any returns that out them outside the criteria for a small business and keep in mind that it’s the first time the programme will be launched and we’ll try our best to make sure that approved small businesses benefit from that,” he said.

The Small Business Bureau of the Ministry of Business says the 20 percent programme would be implemented by all budget agencies- government agencies, Regional Democratic Councils and subvention agencies- from January 1, 2019, in keeping with a Cabinet decision in October, 2019.

The  Bureau  plans to sanitise its small business database that lists more than 10,000 entities.

Meanwhile, the Small Business Bureau boasted less than one percent rate of delinquency on a total of GYD$1 billion in loans guaranteed with the two commercial banks- Republic Bank and the Guyana Bank for Trade and Industry- since 2014.  He attributed that to screening, site visits and continuous monitoring. “We continue that relationship with them. I believe that that is important because we know when they are going to fall short and they can tell us and we try to see ways we can work around it so that we can keep them in the paying mode. We want them to service their loans. We want them to be successful. That is excellent compared to any commercial bank here in Guyana,” he said.

On the other hand, Porter said only about 50 percent of loan applications have been approved by the commercial banks because applicants could not prove that they have the ability to repay and could not successfully defend their business plans. “We do not have any control of who gets a loan, when they get a loan or how they get a loan. We do not have any influence over that. That is 100 percent determined by the banks,” the Chief Executive Officer added.

He added that the situation is similar when it comes to accessing the Bureau’s grants because the decision is made by an external grants committee. Of the 10,000 clients, 559 have received grants totalling GYD$177 million over the last few years, he said.

For next year, Porter said GYD$10 million would be set aside for grants that would focus mainly on renewable energy projects and those that would contribute directly to Guyana’s Gross Domestic Product.

In terms of training, the Bureau said in an effort to deal with a loss of jobs as a result of the closure of several sugar estates, 180 persons were trained in catering and sewing, 20 in plumbing and 147 in farming.

The Small Business Bureau, according to the CEO, next year intends to select a number of very good performing entrepreneurs to propel them into the export sector. “Everybody can’t sell in Guyana so some people would have to have the tenacity to go out there,” he said, adding that part of the focus would be on certification.