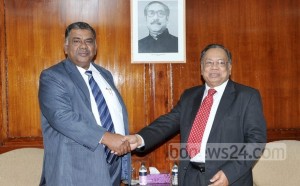 Former Minister of Home  Affairs, Ronald Gajraj died on Saturday at the Woodlands Hospital where he was rushed earlier in the day, former President of Guyana, Donald Ramotar said.

It was unclear what was the cause of death, but sources indicated that most likely he suffered a heart attack. He served as Home Affairs Minister from 1999 until his resignation in 2005 as a result of then opposition political pressure.

Ramotar said Gajraj’s passing was a “great loss” to Guyana and all its peace-loving people as he had played a major role in fighting violent criminal gangs who had been holed up in Buxton.

“He was a very dedicated man who made a tremendous contribution to this country, particularly in the area of crime fighting,” said Ramotar a long-serving executive member of the now opposition People’s Progressive Party (PPP).

The former Guyanese leader, in paying tribute, recalled that Gajraj, a former military officer and Attorney-at-Law, had almost battled the 2002-2012 crime spree of murders, robbers, kidnappings and disappearances despite not receiving full support by then former top police and military officers.

“Some of the people, who were supposed to be fighting crime, we  see where they are now and this confirms that the criminals had received political support to protect them in Buxton,” said Ramotar.

The former President noted that those senior security officials “were not totally loyal”.

During a great part of the crime spree, the Police Commissioner was Winston Felix and then Chief-of-Staff of the Guyana Defence Force was Brigadier Eddie Collins; the latter being an adviser and the former now a Minister of Citizenship and Immigration.

In turn, the then opposition People’s National Congress Reform had spearheaded a campaign against Gajraj in 2004 on the grounds that he had approved gun licences for a death squad that had been responsible for killing several persons.

A Commission of Inquiry had failed to establish that there had been credible evidence that Gajraj had been linked to a state-sponsored death squad. In addition to the revocation of his American visas, the Western diplomatic community at the time had frowned on his reinstatement as Minister of Home Affairs.

Following his resignation in 2005, he had been appointed Guyana’s High Commissioner to India, a position he had held until 2015 when the PNCR-dominated coalition won the general elections.

President David Granger has long promised to hold a Commission of Inquiry into the killing of at least 400 persons during that period he often describes as “the troubles”.

Phone records at that time had shown that he had been in constant contact with Axel Williams for whom he had approved a firearm licence. Williams, who was subsequently killed, had been widely believed to have been behind the gunning down of five men at Light and Robb Streets in November, 2002.