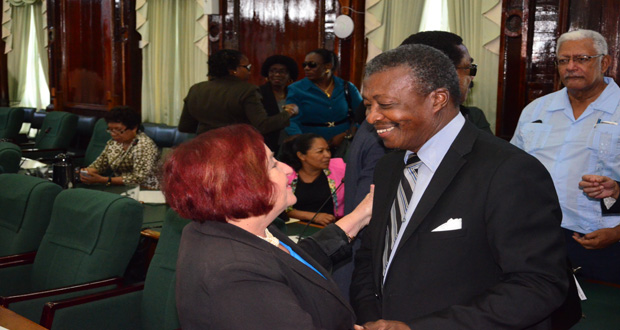 House Speaker, Dr. Barton Scotland does not support High Court action on the issue of whether the Prime Minister, while performing presidential duties, should sit in the National Assembly to the Standing bipartisan Committee on Constitutional Reform.

“In matters such as these, it has been our wont to have recourse to our Justice System for the solution. I do not recommend resort to our Justice System for the solution of a matter of this nature. The concept of winners and losers is not one to be embraced here for a permanent solution to this very important issue,” he told opposition Chief Whip, Gail Teixeira in response to her letter.

Saying that he was also not in favour of ruling unilaterally or any other third party as this that would not lead to a final resolution, the House Speaker observed other laws are that “may have a bearing on the treatment of this matter”.

However, opposition People’s Progressive Party (PPP) front-bencher Attorney-at-Law, Anil Nandlall said Friday that Scotland’s move is expected to be followed by High Court action. “It will eventually reach the court for its conclusive resolution and for future guidance. It is simply unfortunate that resort to the court is necessary to ensure that the law is not violated in the future by the head of the country’s premier law making institution,” Nandlall told Demerara Waves Online News.

The PPP earlier this week strenuously objected to Prime Minister Moses Nagamootoo sitting in the House while had been performing presidential duties while President David Granger was in Cuba for a second round of chemotherapy for non-Hodgkin’s Lymphoma.

Granger has since returned to Guyana, but the issue has not died away.

Among the arguments by the PPP is that the Prime Minister is in a conflict of interest situation because he could find himself voting on a Bill that he would later have to sign into law as President.

Nandlall disagreed with the Speaker’s decision to send the issue to the Constitutional Reform Committee. “This Committee’s only mandate is to consider proposals for constitutional reform. So rather than ensuring compliance with the Constitution in its currently form, the Speaker, apparently, is recommending its reform!,” said Nandlall, a former Attorney General, on his Facebook Page.

He accused Scotland of double standards in dealing with parliamentarians while allegedly aiding a violation of the constitution. “This is a Speaker who exacts from Parliamentarians the highest degree of rectitude but refuses to uphold the supreme law of this land. The end result is the Head of the premiere law making institution of this country refuses to uphold and in fact contributes to violation of the most superior of our laws, the Constitution,” Nandlall argued.

“Our Parliament must be the laughing stock of the Commonwealth”, he said, because the “makers of the law are treating the supreme law with such contemptuous disregard.”

Prime Minister Nagamootoo has said the PPP’s plan to remove him from the House was aimed at sowing confusion in Guyana.