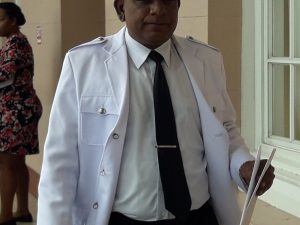 The Sergeant-at-Arms on his way to deliver the letters on behalf of Opposition Chief Whip, Gail Teixeira.

The start of the consideration of estimates for Guyana’s government ministries and other state entities was off to a late start on Monday, prompted by the opposition challenging the constitutionality of the Prime Minister sitting in the House while performing presidential duties.

The sitting was scheduled to begin at 10 AM but instead started at about 10:45.

Opposition Chief Whip, Gail Teixeira delivered two letters to the Sergeant-at-Arms on Monday for him to dispatch to the House Speaker, Barton Scotland.

Scotland later told the House that he could not provide a response immediately due to the issues raised.

Teixeira later told reporters that if the House Speaker disagrees with the People’s Progressive Party’s position on Prime Minister Nagamootoo sitting in the House at this time, her party would move to the High Court.

She could not immediately say if any court action would effectively include an application to block consideration of the estimates until the court decides.

President David Granger is expected to return this week from Cuba where he has gone for a second round of chemotherapy. 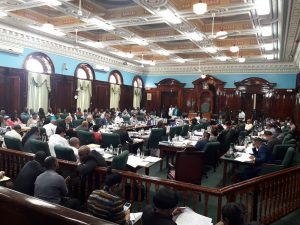 Inside the National Assembly’s Chamber: The wait is on!

While the House Speaker considered the ramifications of the PPP’s position, parliamentarians and top officials of the government were in the Chamber awaiting the start of the proceedings.

Among the PPP’s arguments is that it will be a conflict of duties for the Prime Minister to vote on the estimates and Appropriations Bill and later sign the Bill into law.

The Prime Minister has maintained that he could not be unelected. He has accused the PPP of plotting to derail the budget, create a constitutional crisis and disorder.