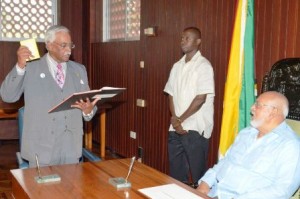 FLASH BACK: Retired Justice Charles Ramson taking the oath of office as Commissioner of Information before then President, Donald Ramotar.

“The Commissioner, having been dismissed for rendering his office dysfunctional,” Nagamootoo told the House, citing Ramson’s failure to submit a report or account “for what what he has done”.

The Prime Minister said Ramson’s services were terminated on March 8, 2018 and his salary has been paid in full. Ramson had in 2017 sued government for salaries owed for a considerable period of time.

Earlier Monday, Minister of State Joseph Harmon told the House that no money has been allocated to the Office of the Commissioner of Information for 2019. He made the disclosure during consideration of estimates of expenditure for next year.

The Commissioner of Information, Retired Justice Charles Ramson has, since the government changed in May 2015, complained that he has not received any salary, has no support staff and has not been given any work to do.

Ramson was appointed Commission of Information under the People’s Progressive Party in 2013.

The Access to Information legislation and the Commissioner of Information was touted as part of Guyana’s transparency in providing otherwise secret or confidential information, except for certain categories.

Meanwhile, the Minister of State announced that the Civil Defence Commission now comes under the Guyana Defence Force for financial matters. That emergency response agency’s administrative responsibility still falls under the Ministry of the Presidency.