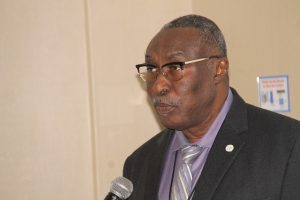 Chairman of the Shipping Association of Guyana, Desmond Sears.

Guyana is spending more to purchase fuels due to the closure of Trinidad and Tobago’s oil refinery, Petrotrin,  increased transportation costs from other sources and the inability of the Demerara River to accommodate larger tankers, Finance Minister Winston Jordan says.

“Until we could dig out the Georgetown Harbour and you could get larger boats and have the storage capacity built in Guyana, we will face this situation so don’t come and holler how prices gone down at the international level but it is still high in Guyana,” he told the House at the weekend during the conclusion of debate on the 2019 National Budget.

Outgoing Chairman of the Shipping Association of Guyana (SAG), Desmond Sears urged government to involve that organisation, shipping agents, terminal operators, brokers, ship owners and surveyors in developing a  master plan for developing ports and harbours. “Shippers, exporters, consignees, consumers all stand to benefit from lower freight. Improved conditions in the harbour will encourage larger and more efficient vessels which will, in turn, mean larger shipments and more revenues and alternative destination,” Sears said. The SAG official said an improved harbour could be an incentive for cruise ships as well as larger more efficient cargo ships to collect bauxite, wood, sand and other bulk commodities.

Jordan explained that Guyana purchases its fuels at spot prices instead of futures – long-term contracts at a fixed price.”We don’t have that capacity. Nobody wants to lock you in for ‘two gallons of gas’; two million yes, but ‘two gallon’ nobody ain’t got time to lock you in in no futures with that. This is the reality,” he said in response to comments made by the opposition that global oil prices have fallen but they are not being passed on to consumers.

“You also have a situation where you don’t have cheap oil anymore. Oil has increased dramatically in price over the last year and it will increase further even if prices stabilise today because the oil is no longer coming out of Petrotrin in Trinidad. That has closed down so we have to go further afield looking for oil,” he said.

The Finance Minister welcomed the fact that the Caribbean Community (CARICOM) has agreed to abolish the Common External Tariff on extra-regionally produced oil. That tax had not been applied to purchases from Trinidad and Tobago which is a member of the Common Market. “That, at least, should hold prices down a little bit so  we are trying all kinds of things to make sure we can stabilise the price,” he said.

The Finance Minister also stated that Guyana does not have big fuel tankers to buy very large quantities of oil at lower prices. “We don’t have tankers so we can’t get economies of scale even if oil falls on the international market,” he said.