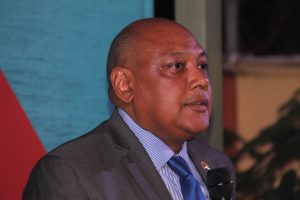 “The Chair, I as Leader, have known and worked closely with for 25 years has never shown racial or political partisanship, but in fact, has worked tirelessly, as politician and as a minister of government for the betterment of people of all walks of life and all backgrounds,” said Trotman in a statement issued by his party.

“We believe that the PNC Chair’s widely reported statements were made in the aftermath of the hotly contested Local Government Elections and have created an unnecessary distraction at this time,” he said. The PNCR has publicly conceded shortcomings in reaching out to its supporters and addressing some of their concerns might have contributed to its defeat in several constituencies in strongholds such as Georgetown.

Trotman, a former PNCR executive member, parted company with that part several years ago over remarks that that party should apologise for its wrongs while in office from 1964 to 1992.

Trotman, who then went on to join expelled People’s Progressive Party executive member, Khemraj Ramjattan and now late Sheila Holder of the Working People’s Alliance to form the AFC, said he believed PNCR leader, President David Granger would not tolerate discrimination or favouritism in any form. That position, Trotman said, was shared by the AFC and PNCR in the February 14, 2015 political agreement named the Herdmanston Accord.

“We look to President David Granger, in particular, to articulate that vision on behalf of government and his party, and most recently this was done at the Biennial Delegates Congress of the PNC,” the AFC leader said.

Based on the Cummingsburg Accord, he said the AFC and PNCR jointly subscribe to pursue a common vision and pathway that put Guyana and all Guyanese first.

The AFC’s position on equality is well known and recently restated, whereby the AFC believes in and espouses equal opportunity for all Guyanese, regardless of gender, ethnicity, religion, political persuasion or sexual orientation. The AFC believes that all Guyanese are entitled to share equally in the benefits of the state,” he said.

The PNCR Chairman on Saturday cited the need for “equality for all” in delivery services to Guyanese.