Flights to and from Cheddi Jagan International Airport delayed, but runway was never closed 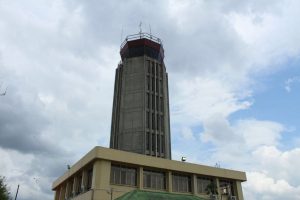 The Control Tower at the Cheddi Jagan International Airport.

Hundreds of Caribbean Airlines passengers destined for Guyana were up to Sunday night stranded in Trinidad, and hundreds others suffered delays in departing from the Cheddi Jagan International Airport (CJIA) but officials maintained that the airport was never closed.

Director-General of the Guyana Civil Aviation Authority (GCAA), Retired Lt. Col. Egbert Field stressed that the Cheddi Jagan International Airport was never closed at any time for all of Sunday, contrary to claims in certain quarters. “The airport is not closed. The airport is wide opened,” he said.

Field said another Notice To Airmen (NOTAM) would be dispatched to the airlines, stating essentially that the Cheddi Jagan International Airport is safe for use and is not closed. “There are no restrictions on take-off and landing as far as I’m aware of. There might have been a misconception without proper information. They might have assumed things have changed but the figures worked out by the Air Navigational  Services Department says the runway is effective or the runway is open for takeoffs and landings as per normal,” he said.

Sources said the crash-landed Boeing 757 jet was placed on a balloon to remove it from the north-eastern end of the runway. This now means that the plane is five feet higher and the Cheddi Jagan International Airport Authority should have informed about the new height of the wreckage.

Field said there has been adjustment in the height of the plane by four or five feet but that “would not impair the operation of aircraft. My Air Services Navigation Officers have assured me of that”.

Aruba Airlines flight departed late and Caribbean Airlines’  5 PM departure from Guyana was up to late Sunday night still on the ground. A source said the flight from Trinidad to  Guyana was yet to arrive.

Former air navigational experts told Demerara Waves Online News that there needs to clear a 50 foot obstacle on takeoff and landing, and so the Airport Authority needs to take account of any changes in height.