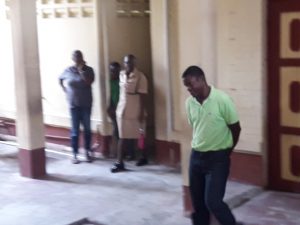 Collis Williams, 37, of  Coverden, East Bank Demerara is accused of stealing one IPhone valued US$350 and one Samsung phone valued US$380, with a total value of GYD$146,000. Police said the property belonged to Captain Basil Ferguson.

Williams pleaded not guilty to the offence.

Investigators were told that Ferguson reported the items were stolen on November 9, 2018 when the plane returned and made an emergency landing at the Cheddi Jagan International Airport.

Chief Magistrate Ann Mc Lennan granted Williams  GYD$100,000 bail , ordered him to lodge his passport with the court and report to the police weekly. The case comes up again on December 13, 2018 at the Providence Magistrates’ Court.

The three other fire fighters- Aubrey Frank, Jamie Kingston and Royden Kennedy- were accused of having under their control articles reasonably suspected to have been stolen.

They pleaded not guilty and were released on GYD$80,000 bail each.

The Chief Magistrate was evidently taken aback when the Police Prosecutor informed the court that some of the witness statements have not been submitted because they are out of the jurisdiction. “That can’t happen”, she said, adding that if that situation continues for the next six months the cases would be in jeopardy.

Frank, 30, lives at Kuru Kuru, Soesdyke-Linden Highway and he is represented by Attorney-at-Law, Clyde Forde. He told the court that his client has been a fireman for four years and he has been interdicted from duty pending a hearing and determination of the case.

Kingston, 30, has been a fireman for the past 11 years and, according to his lawyer Eusi Anderson, “he vehemently denies every allegation”.

The prosecutor failed to oppose bail on the grounds that the allegations were serious and the circumstances under which the offences were allegedly committed.