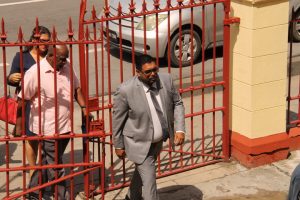 Former Minister of Housing, Irfan Ali was Wednesday released on self-bail (no cash) on 18 charges of conspiring to defraud government of a total of GYD$174 million by selling land below their valued prices.

Chief Magistrate Ann Mc Lennan released Ali in his own recognizance after Prosecutor, Attorney-at-Law Patrice Henry said he would not oppose a significant cash bail.

Ali was charged indictably which means a preliminary inquiry would be held to to determine whether he should face trial by a judge and jury.

Defence Lawyer Devendra Kissoon, who led a battery of five lawyers, successfully opposed the cash bail application on the grounds that Ali is a parliamentarian, Chairman of the Public Accounts Committee and co-chair of the bipartisan Economic Services Committee as well as Shadow Finance Minister.

He assured the court that the 38-year old Ali “intends to dutifully fulfill his duties” and “given the nature of his background” “there is no reason for him not to be released on his own recognizance”.

Ali faces 19 indictable charges for conspiring with unknown persons to sell lands at Goedveragting-Sparendaam, East Coast Demerara to recklessly sell the house lots for GYD$39.8 million. The Guyana Police Force Special Organised Crime Unit said the lands were actually valued a total of GYD$212.4 million at the time of their sale mostly in 2010 and 2011.

Attorney-at-Law, Anil Nandlall, in also opposing bail, said he has never seen a charge conspiracy to defraud because lands were sold lower than market value.

Attorney-at-Law Priya Manickchand said Ali was innocent as the lands were sold under a national policy. “He is aware of what he did as part of a national policy. He did nothing wrong,” she said. She said the charges were trumped up and politically motivated at the time of the national budget, the coalition’s poor performance at local government elections and the opposition People’s Progressive Party about to decide on its presidential candidate for the 2020 general elections.

Among those, SOCU says, in its charges who got lands at significantly reduced purchase prices were then President Bharrat Jagdeo and former Public Service Minister Dr. Jennifer Westford.

In relation to the sale to Dr. Westford, she acquired her parcel for GYD$1.5 million instead of the valuation price of GYD$7.3 million.

Then Ambassador George Hallaq and his wife bought land at the same East Coast Demerara location for GYD$5 million instead of the valuation price of GYD$29.7 million.

A plot of land now owned by LSR Inc; a company linked to Russian Aluminium (RUSAL), was sold to Robert Persaud for GYD$1.5 million instead of 11.8 million, the valued price.

Among the PPP supporters in the packed courtroom were former Prime Minister Samuel Hinds and Executive Secretary of that party, Zulfikar Mustapha.

Ali was arrested at about 6 AM Wednesday at his home by SOCU agents. He was processed by police and he entered the courtroom at 10:54 AM.