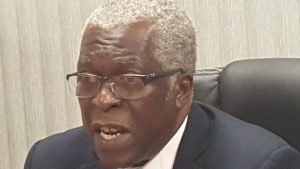 Director-General of the Guyana Civil Aviation Authority (GCAA), Retired Lt. Col. Egbert Field told Demerara Waves Online News that the region’s interests are not properly represented by being part of the Latin American and Caribbean block.

He singled out issues such as the impact of hurricanes on airports in the Caribbean that could only be properly if the region has its own seat on the ICAO Council. 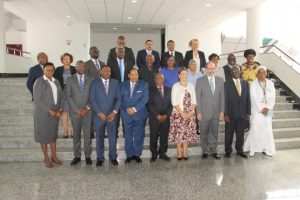 Caricom Secretary General, Irwin La Rocque (third from right front row) with other delegates and special invitees at at the opening of the ICAO meeting in Guyana.

on Wednesday at the opening of the three-day ICAO meeting being held at the Arthur Chung International Conference Centre. “It is most desirable that small states to have a voice around the table to ensure that their concerns are represented.

He observed that of the 36 seats on the ICAO Council, one seat allocated to the Caribbean “is being determined by a body which has a minority of Caricom membership”. “We respectfully submit that Caricom countries, which are members of the ICAO, represent a distinct geographical grouping and request a seat on that basis,” he said. The Caricom Secretary General said Caricom states want to be represented with full voting rights on the ICAO Council.

The GCAA official said all States and region are different and only those living in those areas understand there are specific issues that need to be addressed. Among them, he said, are natural disasters such as hurricanes that could devastate an entire airport. “Not until you live in an area or within a region and have passed through some of the effects such as weather phenomena will you be able to understand and represent them,” he said. 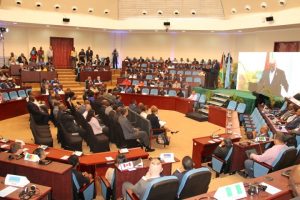 The opening of the ICAO meeting in Georgetown, Guyana on November 21, 2018.

The Council has numerous functions, notable among which are to submit annual reports to the Assembly; carry out the directions of the Assembly; and discharge the duties and obligations which are laid on it by the Convention on International Civil Aviation. On occasion, the Council may act as an arbiter between Member States on matters concerning aviation and the implementation of the provisions of the Convention; it may investigate any situation which presents avoidable obstacles to the development of international air navigation and, in general, it may take necessary steps to maintain the safety and regularity of international air transport.

The ICAO says the Council, which is a permanent body of the Organization responsible to the Assembly, is elected by the Assembly for a three-year term. In the election, adequate representation is given to States of chief importance in air transport, States not otherwise included but which make the largest contribution to the provision of facilities for international civil air navigation and States not otherwise included whose designation will ensure that all major geographic areas of the world are represented on the Council.