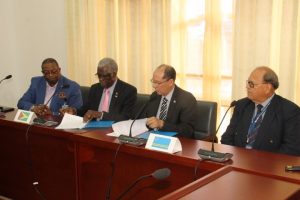 Guyana and Aruba on Thursday inked a memorandum of understanding (MoU) to pave the way for more carriers from that Dutch territory to fly to the lone former British colony on the north-east coast of South America.

Signing the agreement were the Director-General of the Guyana Civil Aviation Authority (GCAA), Retired Lt.Col. Egbert Field and the Manager of the of Strategic and Policy Unit of Aruba’s Department of Civil Aviation, Anthony Kirchner.

Field explained that the MoU is a precursor to an Air Services Agreement that would first have to be approved by The Netherlands which is responsible for Aruba’s foreign policy.

Speaking at the signing ceremony on the sidelines of the International Civil Aviation Organisation (ICAO) meeting being held in Guyana, Kirchner hoped that the memorandum of understanding would facilitate more airlines flying directly from Aruba to Guyana.

“It was quite a work, a lot of pressure to  fulfill all the gaps and to continue, especially for Aruba Airlines as a start. Hope we would get more airlines between Aruba and Guyana and the connectivity because  we don’t have a straight flight. We hope that we can arrange, with the help of Aruba Airlines, to get a straight flight not through Cuba. We would like to keep Cuba but a straight a flight is always what our passengers want. They want to go straight to their destination and this agreement will definitely be the start of further agreements in the future,” said Kirchner whose department is part of Aruba’s Ministry of Transport, Communication and the Primary Sector.

Field remarked that negotiations for the accord began several months ago when Aruba Airlines was given tentative permission by Guyana’s Minister of Aviation, Annette Ferguson pending the completion of the memorandum. “Temporary approval was given to them to conduct their operation. We did not wait until his document was signed,” he said.

The GCAA Director-General said Guyana is unwavering in its support for an open-skies policy through air services agreements “because these instruments are the elements and the basis on which airline could ride on”.

Chief Executive Officer of Roraima Airways, Captain Gerry Gouveia, whose company provides ground-handling services to Aruba Airlines, praised the GCAA for facilitating the Mou. “It was your diligence and eye for detail and getting this done and your guidance was invaluable,” he said.

Aruba Airlines, he said, has committed to continue and increasing operations in Guyana.