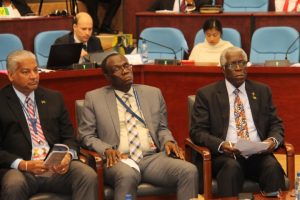 Guyana and Ghana on Friday signed a bilateral air services agreement that could pave the way for direct flights between Africa and South America once the two countries make the routes  sufficiently attractive for low-cost airlines to get passengers.

If direct flights begin between the two continents, the journey would be reduced to eight hours from almost 38 hours via the United States and Britain.

The open skies agreement was inked by Guyana’s Junior Aviation Minister, Annette Ferguson and Ghana’s Minister of Aviation, Kofi Adda immediately after a panel discussion on “Promoting Air Links between African States and the Diaspora”. The events were held as part of the International Civil  Aviation Organisation’s (ICAO) Air Transport Meeting that was held in Guyana from November 21 to 23, 2018.

Speaking at the panel discussion, Director-General of the Guyana Civil Aviation Authority (GCAA), Retired Lt.Col. Egbert Field said it was time Africa and the African Diaspora use the World  War II route between Atkinson Airfield, now Cheddi Jagan International Airport and Senegal, for refueling and rationing . “It (route) served the purpose during the war to bring peace and it now can serve a purpose during peacetime to bring prosperity to the peoples who were divided because of selfish reasons during the 16th and 17th centuries. The peoples can be brought together again- the African continent and the Diaspora,” he said. 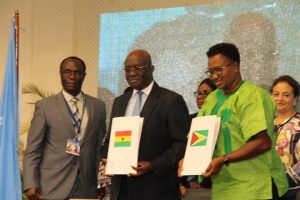 Field said if the Ghana-Guyana air-bridge is developed into a viable route, much of the revenues being spent on hospitality services in North America and Europe, through which most flights transit, would be spent in South America and Africa.”Money is being made in that part of the world and stifling what should be ours to share with our brothers across in establishing a shorter link so let’s go forth, open up this link, deprive them of any extra money, millions and billions of dollars that they are using and they are taking from us and let us just share it across this five hour or five and a half hours stretch of water,” said the GCAA official.

Guyana’s Foreign Affairs Minister, Carl Greenidge noted the “cost, waste and frustration” of flying from Africa to South American, something he hoped the Caribbean Community (CARICOM) and the African Union (AU) would work together to resolve and promote trade and investment. “The establishment of direct air connections between Guyana and Africa will reduce the distance between Guyana and the African as well as Middle Eastern countries. It will enable African citizens to have direct contact with their kith and kin not only in Guyana but across the entire Caribbean region,” he said. Other benefits, he referred to, include fewer stops, cheaper air fares, and strengthening of student and cultural exchanges as well as increased tourism.

Director-General of the Ghana Civil Aviation Authority (GCAA), Simon Allotey, in responding to questions from Adda, said practical initiatives to generate sufficient demand for flights between Africa and the Diaspora especially the Caribbean.  Allotey said those include stimulating tourism, trade, investment, cultural exchanges and aggressive marketing to grow demand for the airlines. “We have to start giving charter operations, low-cost carriers…to drive demand, we need to introduce low-cost carriers, introduce charters and make it available for our citizens to move across our two continents,” Allotey said. In the area of multi-destination packages, the GCAA official cited the need for visa-free entry for African visitors to move freely throughout the Caribbean.

Field identified the media as a critical stakeholder to report on some of the positive developments in Africa and the Caribbean instead of being seen as slums and crime havens. “Most of the information coming out through the media about Africa is negative to people in the Diaspora and the information coming out from the Diaspora which the people in Africa are getting are negative about the crimes so all the glorious news about New York, about Canada about prosperity and those various cities,” said the Guyana Civil Aviation chief.

Director-General of the Jamaica Civil Aviation Authority (JCAA), Nari Williams-Singh raised concerns about the scrapping of the single-entry system to Caricom member states that had been implemented for Cricket World Cup 2007. He said such a system could help with multi-destination visitors. “I ask my brothers and sisters in Caribbean states why couldn’t we continue with that. It would make ease of travel within the Caribbean that much more attractive….We have done it in 2007 for the World Cup. We have proven it can be done. That’s something that would attract the multi-destination travel for  persons when they come into the Caribbean,” Williams-Singh said.

Speaking at the opening of the ICAO meeting, CARICOM Secretary-General Irwin La Rocque said the region was considering reintroducing such a system to facilitate the easy movement of persons travelling to many Caribbean destinations.  “We are seeking to reintroduce the single security check for direct transit passengers on multi stop inter-community flights. This will no doubt be a welcoming initiative for regional travelers”, he said.