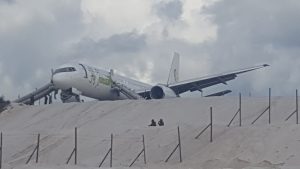 Fly Jamaica on Saturday indicated it was probing whether the passenger, who died following last week’s incident involving its passenger jet, was as a result of injuries sustained aboard that aircraft.

Dead is Rookia Kalloo, who was a passenger aboard Fly Jamaica flight OJ256 which the airline said “suffered a runway excursion” on Friday 9th November, 2018 at Guyana’s Cheddi Jagan International Airport.

“Whilst Mrs Kalloo is not recorded as having been treated in hospital for any injuries as a result of the accident, we are investigating the position further,” the airline said.

Fly Jamaica said it was lending all possible assistance and support to Kalloo’s relatives “as they come to terms with their loss”.

The carrier appealed to the media to respect the family’s privacy at this sad time.

Nine other passengers had received injuries that were not life-threatening.

The Canada-bound passenger jet reportedly had a hydraulic problem and the pilot opted to return to the Cheddi Jagan International Airport.