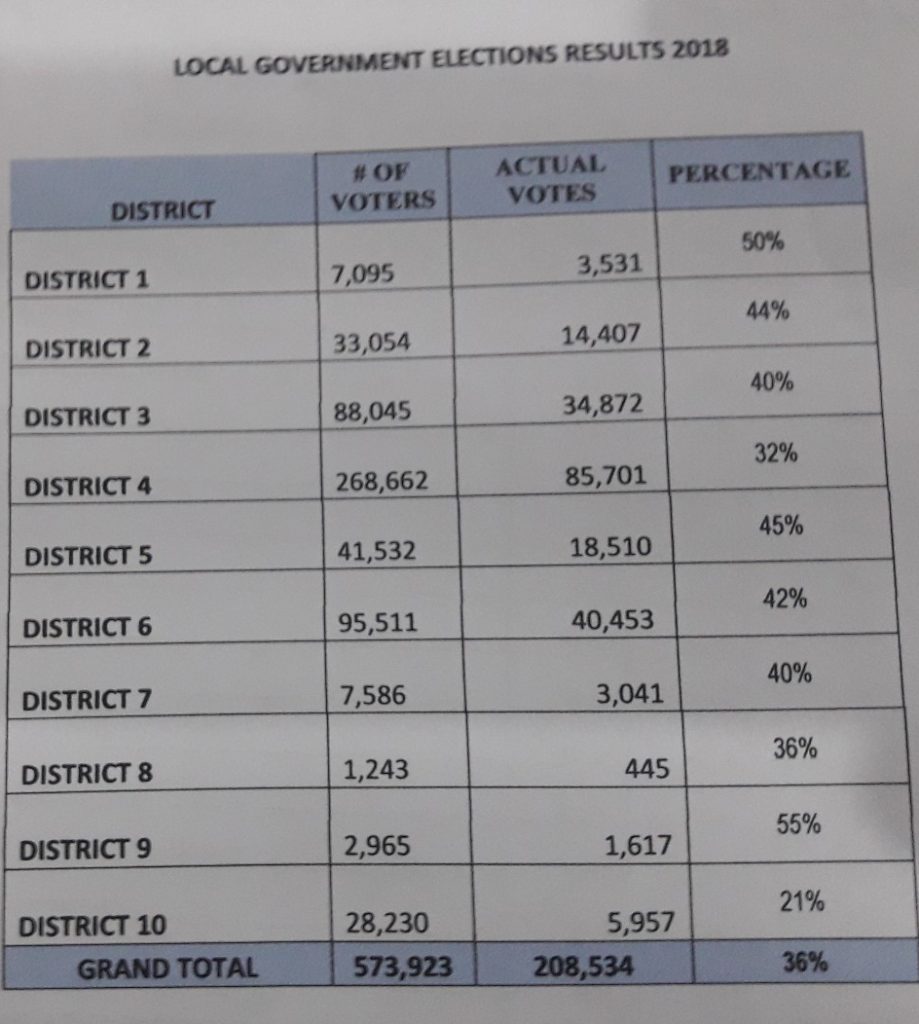 GECOM’s claim has since been rejected by A Partnership for National Unity (APNU) from which Local Government Minister Ronald Bulkan comes. Bulkan, who was at a joint APNU+Alliance For Change (AFC) news conference at the headquarters of the People’s National Congress Reform (PNCR), did not respond to the criticisms by GECOM.

However, PNCR General Secretary Amna Ally jumped to Bulkan’s defence, saying a lot was done collectively by government to educate the electorate. “In terms of blaming Minister Bulkan and whoever;  no blame should be laid at Minister Bulkan. This coalition did what they had to do in terms of voter education all across the country and we didn’t have to have Minister Bulkan going to the various regions. We have a cadre of trainers and in all the regions we have had this cadre taking the message, training the people in the various locale,” she said.

The PNCR General Secretary said  increased participation in local government elections would take some time because Guyanese have not yet grown accustomed to the system after being deprived of such polls between 1994 and 2016. “The people of this country have not yet grown accustomed to local government elections. It is a hard task for us because it’s a long time- 22 years versus three years- to break into the electorate that this local democracy will benefit,” she said.

Lowenfield denied that the Commission was attempting to shift responsibility for voter education to the Ministry of Local Government that has been styled Ministry of Communities. “It’s not a matter of shifting. They have a mandate and I’m sure if you speak with them they will say this is our mandate,” he said, adding that GECOM is mandated to conduct local and general elections.

With GECOM yet to appoint a civic and voter education officer, GECOM Chairman, James Patterson said the Commission rather than the Chief Elections Officer have to deliberate on the appointment of such a person. After Patterson repeatedly refused to say what has been stopping the Commission from appointing a civic and voter education officer, Deputy Chief Elections Officer Roxanne Myers explained that GECOM’s voter education mandate focuses on the “technical and the procedural aspects of how a voter should vote” what voluntary groups and parties should know for nomination day, for the submission of symbols, and what are valid and rejected votes. When it comes to inspiration of the electorate or to treat with any sort of apathy, I don’t believe that that’s within our remit,” Myers said.

The GECOM Chairman expressed concern about the low voter turnout. “The apparent apathy of the electorate, I find it very disturbing”. “GECOM cannot be blamed for the apathy. We have done our best,” he added.

GECOM was allocated GYD$1.2 billion for Local Government Elections 2018, but Lowenfield said he was sure not all of the cash was spent.

2018-11-16
Denis Chabrol
Previous: Oil sector a reason for American Airlines choosing Guyana; carrier staying “for many years to come”
Next: APNU+AFC confident all MPs will vote against Jagdeo’s no-confidence motion