Oil sector a reason for American Airlines choosing Guyana; carrier staying “for many years to come” 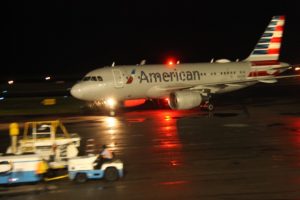 The American Airlines flight that landed at the Cheddi Jagan International Airport at 11:24 Thursday night, November 15, 2018.

American Airlines (AA) , which Thursday night began scheduled flights between Guyana and the United States (US), says the country’s emerging oil and gas sector is one of the reasons for choosing this South American destination.

“It’s all part of it but I think even before the announcements were made about the oil and gas sector we were looking at this market. It has been on the list for some number of years,” American Airlines’ Managing Director, Regulatory and International Affairs, Robert Wirick told Demerara Waves Online News.

Hundreds of American and other oil industry experts and other sectoral workers often travel to Guyana for various reasons.

He added that AA chose Guyana after examining the market and realigning some of its operations in Latin America. “We analysed this market and we think the time is right. We have been looking at it for year and we think that with our new network of calibrations that Miami-Guyana makes the perfect sense”. 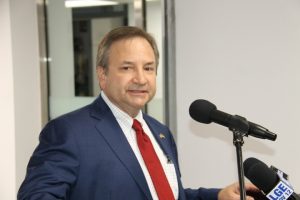 In his remarks at the welcoming ceremony for the inaugural flight at the Cheddi Jagan International Airport, Wirick boasted that American Airlines is the only United States carrier now serving Guyana with connections from Miami to almost 150 destinations in the US and other countries. “This new service is the culmination of months of planning and hard work by our teams,” he added. Wirick added that AA plans to be in Guyana for the long haul. “We hope to strengthen our presence in the country for many years to come. We are committed to this market,” he added.

US Ambassador to Guyana, Perry Holloway said AA’s decision to add Guyana to its route “is certainly going to make them more of a leader in the region”. “More flights, more interaction between the people of our two countries allow for greater cooperation and allow us to work much more closely together on things of mutual interest,” the American envoy said.

For now, the carrier would be sticking to flights to Miami because that is a hub to Latin America, although a number of flights go to New York where there is a huge Guyanese diaspora. American Airlines is second only to Suriname Airways in currently serving the Georgetown-Miami route. AA is offering four flights per week. 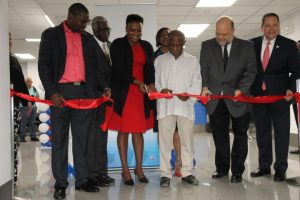 Director-General of the Guyana Civil Aviation Authority (GCAA), Retired Lt.Col. Egbert Field said American Airlines, at the regulatory agency’s request, brought forward its start-up date  to here to November 15 to cater for next week’s International Civil Aviation Organisation meeting to be held in Georgetown. “We welcome them because the kind of connection they bring to Guyana would surely enhance not only tourism but also trade in Guyana,” he added. AA, he said, had originally planned to begin operations in December.

Junior Minister of Public Infrastructure, Annette Ferguson, in welcoming the carrier to Guyana, informed that the total passenger traffic to Guyana last year was 664,624 persons- the highest in the country’s history. She said government was “committed to facilitating investment in aviation”.

Acting Prime Minister and Foreign Affairs Minister, Carl Greenidge hailed the presence of AA, one of the largest US carriers, in Guyana, as a “very positive step towards the development of air services in Guyana; services that are currently lacking and services which are an important prerequisite for the expansion and greater sophistication of the economy itself”.

He called for joint ventures between airlines and tourism companies to allow Guyana to offer the rest of the world Guyana’s ecotourism product.