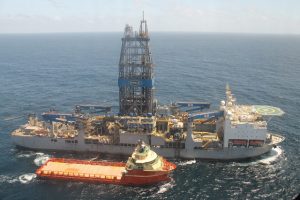 The Guyana government has already intervened to address claims of discrimination against Guyanese seafarers by one of the companies contracted to hire them to work aboard vessels involved in oil exploration offshore Guyan.

The Guyana Seafarer’s and General Workers Union (GS&GWU) said Wednesday that most seamen and other mariners were not being employed by companies that have been contracted by ExxonMobil to work on vessels in the Guyana basin. That union also claimed Guyanese seafarers were also being paid lower than their counterparts from Trinidad and Tobago.

While the union said the seafarers’ concerns were not addressed to their satisfaction by Minister of Public Infrastructure, David Patterson, he told Demerara Waves Online News there is evidence that he represented the workers’ cause. “It is unfortunate that the new body was not forthright enough to inform that I acted on behalf of all the members provided to me since last year,” Minister of Public Infrastructure, David Patterson told Demerara Waves Online News. On the issue of disparity in salaries, Patterson said that “that was never raised with me, only employment was raised.”

Operations Manager for Eldorado Offshore, Richard De Nobrega also rubbished the claims by the union that only Trinidadians were being employed, saying that 80 percent of the crews aboard the vessels are Guyanese who undergo paid overseas training.

“Our first and only priority is Guyanese,” said De Nobrega who is also Operations Manager of El Dorado’s parent company, RAMPS Logistics. “We don’t hire Trinidadians to work in Guyana. Let me make this explicitly clear.
El Dorado offshore hires no other nationality but Guyanese including seafarers,” he added.  The official said in some instances Guyanese are being employed to work on vessels offshore Suriname.

De Nobrega said El Dorado Offshore was contracted to hire personnel after a competitive process based on its success and adherence to international standards. He noted that company has already been awarded by the Shipping Association of Guyana for its emphasis on local content.

GS&GWU General Secretary, Simone Fortune said Guyanese seamen required work-permits when taking up employment opportunities in Trinidad and Tobago, but nationals of that twin-island republic are taking up similar jobs at short notice without work permits. Fortune alleged that the Guyanese seamen and related categories of workers were being paid less than their Trinidadian counterparts.

“We have other concerns where they are not employing the Guyanese officers and even when they do employ the officers and the ordinary sailors and the able seamen, they will not pay them the same salary rate as they would pay the Trinidadians, even though they are doing the same work,” Fortune said.

Industry sources said variations in pay vary from position to position, certification, levels of experience, among others.

While the GS&GWU official said the workers are unionised, she said the contracted companies were not contacted as “we were trying to do it through the higher authorities”.

“The main frustration of the seafarers focused on Trinidad seamen being given systematic preference over qualified Guyanese to jobs on the oil rig and related work. This came about, it was alleged, because Exxon has sub-contracted the hiring of seamen to Ramps Logistics, a Trinidadian –owned firm which in turn largely hires from three other Trinidadian firms with offices here,” the Policy Forum Group said. They claimed, according to the group, that jobs are advertised in the newspapers, the men allege, but when Guyanese apply, they rarely get picked. “Advertised jobs include able-bodies seamen (AB) ordinary sailors (OS0 captains, mates , engineers and riggers.  Many Guyanese seafarers qualified in all of these positions, with years of experience in the oil industry in the Caribbean and the Middle East are not getting jobs.”

The GS&GWU, according to the Policy Forum Group, claim some 2000 qualified seamen are available in New Amsterdam alone.

The GS&GWU, formed in March 2018 wrote to the Minister of Foreign Affairs because the discrimination which they allege is taking place is primarily rooted in Trinidadians being hired on more favourable terms than Guyanese.

The Policy Forum Group ended with assurances that documentary evidence to substantiate the allegations would be provided to the Guyana Human Rights Association in the coming week.

De Nobrega confirmed that workers are required to work 28 days on and 28 days off in keeping with safety standards, but again he stressed that no Trinidadians were employed on any of the vessels through El Dorado.