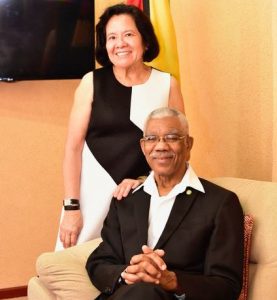 President David Granger is resting comfortably at an official residence following an intensive series of tests by specialist doctors immediately after he arrived in Cuba on Tuesday, October 30, 2018, the Ministry of the Presidency said.

The President is receiving treatment at the Centro de Investigaciones Medico Quirugicas (CIMEQ) in Havana, the statement added.

The Ministry of the Presidency added that “Clinical analyses are still incomplete and it is expected that the Guyana Embassy in Havana will issue a statement when enough evidence is available.”

“The Head of State has responded satisfactorily to medical interventions over the past week, however, and is recovering well,” the statement added.

The sratement added that “President Granger wishes to assure all citizens that he is receiving the best possible medical advice and attention. The President wishes to thank Guyanese for their expressions of concern.”