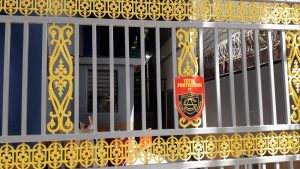 Residents of a section of Robb Street, Georgetown on Tuesday night complained to inspectors of the Environmental Protection Agency (EPA) that a very loud humming sound from generators at Teleperformance call centre was disturbing them from resting.

The EPA inspectors used noise meters to conduct almost four-hour long tests outside the Teleperformance building and the neighbourhood, in response to concerns about the adverse impact of the 24-hour noise that has been emanating from the generators for more than three weeks now.

Demerara Waves Online News was told that the EPA inspectors would be analysing the noise level in keeping with the standards laid down by the Guyana National Bureau of Standards.

Unconfirmed reports are that only one of the two generators was switched on during the monitoring exercise on Tuesday night. Usually the noise is also heard on Regent Street and North Road.

One of the inspectors spoke with a sample of residents on Robb Street between Camp and Alexander Streets. A night-time food vendor said, “we ain’t get to rest with it and especially the people closer to it will find it difficult to cope with whole day, whole night.” 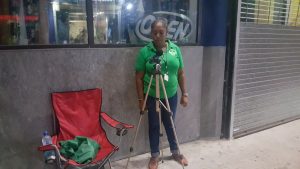 An inspector of the Environmental Protection Agency recording noise level outside the Teleperformance building.

The residents said no one from Teleperformance has ever spoken with the residents about the loud noise whose level seems to increase during weekends, late nights and early mornings.

Another resident believed that the Automatic Transfer Switch, which facilitates the ‘change-over’ from the generators to the Guyana Power and Light’s supply, has become defective. He questioned why the company could not purchase the switch. “When you wake up four O’clock in the morning, don’t plan to sleep back because you can’t sleep back,” said Clarence Drakes.

He and another member said they would be willing to accept the noise for short periods of time because they are aware that hundreds of jobs are at stake should the call centre suffer downtime due to no electricity. “I understand that they have hundreds of people working there if you shut them down but what about the welfare of the people around here too?,” he said.

The resident said the noise frequency was also disrupting signals from his cable television operator, E-Networks.

Several weeks ago, a power outage had forced hundreds of Teleperformance call centre workers to vacate the building because of the heat inside.