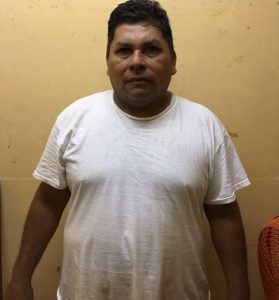 Former Head of Guyana’s Customs Anti-Narcotics Unit (CANU), James Singh says one of the men held in Jamaica on a United States (US) arrest warrant for alleged drug trafficking had been previously held in Guyana during the search of a vessel for cocaine which had eventually triggered a Commission of Inquiry.

Current top CANU officials have said the detention of the trio had marked the culmination of a long operation involving foreign partners and at the same time the beginning of going after big drug lords in Guyana.

Singh said Ricardo Ramirez, who is among the trio held in Jamaica, was allegedly responsible for supplying boats and semi-submersible vessels as well as large amounts of cocaine on a trans-Atlantic route and the supply the narcotic to dealers in Guyana and Suriname. The boats are said to be often disguised as fuel boats that operate between Guyana and Venezuela.

He said the the detention of  Guyanese businessman Shervington ‘Big Head’ Lovell, the Colombian and Surinamese in Jamaica on a United States (US) arrest warrant for alleged drug trafficking has cleared his name of suspicion that he had acted unilaterally in releasing a boat that had been suspected of cocaine trafficking.

The former CANU Head on Tuesday maintained that he never kept Guyanese authorities in the dark about the detention, search and release of that vessel between February 11 and 14, 2017. Singh said that it was made clear at a Commission of Inquiry (COI) that had been conducted by Retired Brigadier, Bruce Lovell that he had kept Public Security Minister, Khemraj Ramjattan abreast of  all stages of the operation.

“I kept the Minister informed way before the operation was launched during the operation and after I presented that evidence at the COI,” Singh told Demerara Waves Online News. He recalled providing evidence including e-mail and text messages to the Lovell Inquiry to prove that he had always been in contact with the relevant authorities.

Singh challenged the Guyana government to release the report of that Commission of Inquiry that had sought to ascertain, among other things, whether CANU had the authority to order the release of the vessel and was such an order lawful or justifiable in the circumstances and what was the role of any foreign power.

Asked if CANU was empowered to release the vessel, Singh said once no evidence was found the law enforcement agencies had no other alternative but to release the unregistered vessel.  He was also adamant that the Guyana government, as high as President David Granger, had been informed about the operation as the US had requested Guyana’s cooperation through the Guyanese leader.  Singh said the Inquiry was held to target him unfairly and remove him as head of that law enforcement agency which is a unit of the Ministry of Public Security. 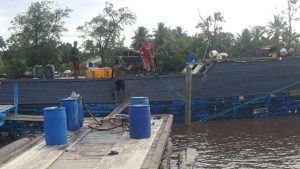 The boat that former Head of the Customs Anti Narcotics Unit, James Singh said was searched for cocaine but no evidence was found.

Shortly after the inquiry was completed, Ramirez’s brother-in-law, whose only name had been given as “Khemraj” had been gunned down on October 3, 2017 at Port Kaituma, North West District.

Singh maintained that the interception of another vessel in the Atlantic Sea on February 16, 2017 with 4.2 tons of cocaine was not connected to any of the three men who were held last week on arrival in Jamaica by that country’s Counter Terrorism and Organized Crime Branch of the police force.

‘Big Head’ Lovell and Surinamese Steven Antonius were said to have waived their rights to fight the US’ extradition request and are due to be flown out by US Marshals to New York later this week.

Ramirez was said to have been responsible for the acquisition of huge boats and semi-submersible vessels and the supply of large amounts of cocaine to groups in Guyana and Suriname. In law enforcement circles, Antonious was cited as an enforcer. “Big Head” was also singled out as allegedly having a major connection to a group that operates in Guyana and Suriname.

At least two of which had been found in North Western Guyana’s jungle-canopied rivers nearer the border with Venezuela were allegedly connected to Ramirez.

A previous Commission of Inquiry conducted into allegations that now convicted drug trafficker, Barry Dataram, had made against CANU had found a range of weaknesses at that agency.

“The testimony of Barry Dataram, upon whose expose’ this Inquiry was initiated, did not achieve the threshold of sufficiency required to support his allegations first made known in the media.  He was reluctant to advance specific charges, call names, and cite instances to support his generalized claims.

The Inquiry, however, was able to place a spotlight on CANU, revealing that there exist patterns of misconduct, improper and (eds: alleged) criminal behavior by the State’s Officials due to their (eds. alleged) involvement in illicit, illegal and corrupt activities.  The Inquiry also discovered the need for a re-engineering of CANU to rectify the capability gaps found in its doctrine, organization, training, materiel, leadership, personnel, facilities, and policy.