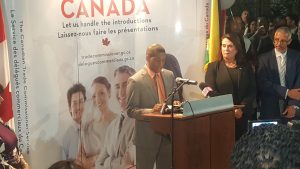 Head of the Ministry of the Presidency’s Department of Energy, Dr. Mark Bynoe

The Guyana government Monday night ruled out granting “special favours” to oil and gas companies and assured investors that the David Granger-led administration was not corrupt.

Addressing a 50-member trade and investment delegation from the Canadian province of Newfoundland and Labrador, Head of the Ministry of the Presidency’s Department of Energy, Dr. Mark Bynoe cited the need for predictability as an essential ingredient for the private sector to plan and decide properly by knowing what the rules are, calculable probability outcomes and associated risks.

He cautioned that predictability should not be interpreted as a means by which businesses would be receive special treatment. “The Department will continue to honour its obligations but it will be firm and consistent with application of the requisite laws. It does not mean that being predictable guarantees anyone or business any special favours but rather it aims to level the proverbial playing field and allow the private sector to take appropriate risk to garner acceptable rates of returns,” Bynoe told the audience that included Canada’s High Commissioner to Guyana, Lilian Chaterjee, Britain’s High Commissioner to Guyana Greg Quinn, top Guyana government officials and senior private sector representatives at a reception held at the Canadian envoy’s residence.

Bynoe declared that the Department of Energy would not be rushing to take advice from experts unless there is sufficient evidence. “The Department is mindful that it will be receiving advice from many expert. It will not, however, be encouraging government or even the private sector to pursue such advice even if they may be well-intentioned. Our decisions will be based on evidence-based facts and cogent information available,” he said.

The Head of the Department of Energy said his entity has begun streamlining the oil and gas sector to focus on efficiency, transparency, predictability, balance and evidence-based decision-making. He indicated that government was interested in joint ventures to exploit mid and downstream opportunities while raising local business standards and increasing their competitiveness. Bynoe highlighted that government was stressing transparency and efficient and effective management of the oil and gas sector through the crafting, revision, piloting and enactment of legislation for the petroleum commission, local content and the sovereign wealth fund.

Minister of Business, Dominic Gaskin, in his remarks, told the Canadian investors that government has to ensure Guyanese benefit from the more than 4 billion barrels of oil equivalent that have been discovered so far offshore Guyana. Assuring that Guyana does not have an extremely corrupt government and private sector or docile population that would see ordinary people not benefiting from the oil and gas sector, Gaskin made it clear that foreign companies would not be allowed to exploit Guyana cheaply.

“I can assure you that situation does not exist in Guyana and I believe it is important that I assure you of that, especially our guests who are visiting here. We don’t want foreign companies to come to Guyana believing that this is a free-for-all and that our entire country can be bought.

Several months ago, transparency and accountability activists had chastised government for negotiating a US$18 million signature bonus with ExxonMobil only after the discovery of the Liza Well that would produce about 120,000 barrels per day from early 2020. With the discovery of eight other wells, Guyana’s daily oil production is expected to soar to 750,000 barrels.

The Guyana government and the Canadian province of Newfoundland and Labrador earlier Monday signed an agreement to facilitate an exchange of experiences and explore business and training opportunities in the oil and gas sector.