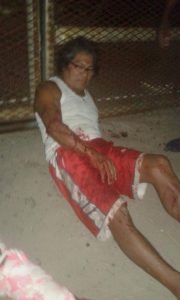 An inmate who was reportedly injured during the unrest at the Lusignan Prison. (photo from media group)

Well-placed sources told Demerara Waves Online News that six inmates were injured with pellets and were rushed to the Georgetown Public Hospital for treatment.

The names of the injured inmates were not immediately available.

The sources said security personnel opened fire on a number of the inmates after they tied their faces with clothing to conceal their identities and attacked prison guards.

It was not immediately clear what sparked off this unrest which has since been brought under control, according to the sources.

The sources said a number of the inmates at the Holding Bay were digging up the tarmac, pelting security service personnel and lighting sporadic fires.

Sources said fire fighters were deployed to the Lusignan Prison as a number of the inmates were set old clothing alight in an effort to gain the attention of authorities.

Meanwhile, a joint services operation was continuing to recapture the prisoners who scaled the wall at the Holding Bay early Monday morning. Prisons Director Samuels said most likely the prison guards were sleeping at the time of the incident and there was no intelligence to suggest that an escape was being planned.