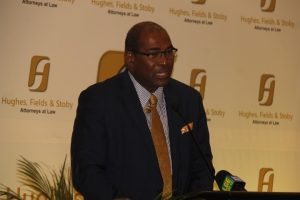 The well-known Guyanese law firm- Hughes, Fields and Stoby- that recently opened offices in the United States ‘oil capital’ of Houston, Texas on Monday said Minister of Public Telecommunications, Cathy Hughes had briefed Cabinet on her “interests”, in the wake of concerns potential conflict of interest by government minister, Cathy Hughes.

“We believe that the Minister has declared her interests to cabinet and  had sought  and continues to seek  independent legal advice  both prior to  and after the publication of today’s front page article about  her legal  obligations,” said Attorney-at-Law, Nigel Hughes, who is the minister’s husband, in a statement on behalf of the law firm.

Hughes later said on his Facebook Profile that his wife has also informed the Integrity Commission of her connection to his law firm.

The firm said its representation of major players in the industry preceded the Minister’s appointment to Cabinet as Minister of Tourism and now Minister of Public Telecommunication.

Nigel Hughes, who is Managing Partner of Hughes, Fields and Stoby, made his firm’s position known in response to concerns raised by the local anti-corruption watchdog, Transparency Institute of Guyana Inc. (TIGI) in a Stabroek News newspaper article on Monday.

Zooming in on the law office’s Texas partner, Greg Clark saying that the firm’s US office would serve as a legislative watchdog to keep an eye on new laws and regulations that might impinge on the oil and gas sector, TIGI reportedly indicated that the Hughes, Fields and Stoby law firm could potentially access privileged information through Minister Hughes.

Reacting, the law firm said, “the clear insinuation being that somehow Minister Hughes would provide the firm with advance information on what laws, regulations and policies were in the pipeline.” In that regard, Hughes, Fields and Stoby assured that “we have been open, transparent and clear in the expression of our intentions here and in Houston.

Further, the law firm suggested that it expected to become aware of new laws, regulations and policies through public announcements, circulation of such material through stakeholder organisations such as the bar associations, private sector organizations, civil society organizations and other stakeholders for comments.

“Hughes Fields and Stoby, like every other private organization, will have access to the above process without any special privileges, ministerial or otherwise,” the firm added.

The consultative process, according to the law firm, is aimed at facilitating the views of the public and stakeholders long before a final decision is made so that all views may  be considered before potentially bad  laws or policies are adopted. The firm added that after the consultative process, all bills are read in parliament then published in the Official Gazette before they are finally adopted on the third reading.

“We are unaware of any recent instance where a cabinet decision went straight from cabinet into law without any prior announcement or consultation,” the law firm added.

TIGI queried what reliable systems have been put in place to avoid possible conflicts such as the one between spouses Nigel and Cathy Hughes. “We want to know that there is insulation of the government, or the business is insulated from her and will not draw on any privileged information that she may obtain due to her position.  People in these positions try to impress upon us that they won’t act on these privileges and we are asked to trust their integrity,” the affiliate to Transparency International said.

“The position as a minister of government is an important and serious one and sometimes people have to make hard choices. If you want to serve in both roles, you have to ensure that you don’t abuse the power entrusted to you.”

Back in 2013 at the peak of the then opposition criticisms about the now aborted Amaila Falls Hydropower Project, information had surfaced that Cathy Hughes had been providing public relations services to Sithe Global, one of the partners for the project and her husband had been Company Secretary for Amaila Falls Hydrpower Inc.

At that time, Nigel Hughes had been Chairman of the Alliance For Change (AFC) and his wife an executive member of that same political party.