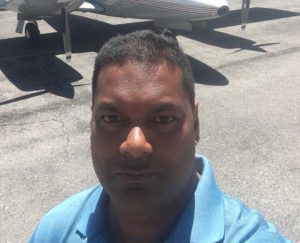 A Guyanese pilot, who was responsible for flying out two small planes from the Eugene F. Correia ‘Ogle’ International Airport two years ago without approval, died in a plane crash off the Long Island, New York coast on Saturday, well-placed sources confirmed.

Dead is Munidat ‘ Raj’ Persaud. United States (US) authorities have not yet identified the body, but his wife, Trisha La Rose Persaud, in a picture with her husband, said on Facebook that “I’ll forever love you my husband Raj Persaud. Gone too soon my love. Until we meet again. RIP.”

Guyanese aviation sources have also confirmed the death of Persaud.

Persaud and unnamed pilot had in June 2016 flown out two Cessna 206 aircraft, which are the subject of High Court litigation in Guyana, from the Ogle Airport without authorization. The aircraft were the subject of a court injunction by Domestic Airways that had barred their removal from Guyana.

The US Navy Times reported that a small private plane carrying three people crashed into the ocean off the coast of Long Island on Saturday.

One body was recovered following the 11 a.m. crash of a twin-engine Piper PA-34 about a mile off of Quogue, in the Hamptons.

Agencies including the U.S. Coast Guard, the New York Air National Guard and the Suffolk County sheriff’s office responded to the crash. “It’s still a search and recovery at this point,” Quogue Village Police Chief Christopher Isola said at a news conference late Saturday afternoon, according to Newsday. “The Coast Guard along with other marine assets will continue in that effort.”

The cause of the crash was not known, Isola said. The identity of the victim who was found was not immediately determined.

Officials said people on the beach reported the plane sputtering before it crashed.