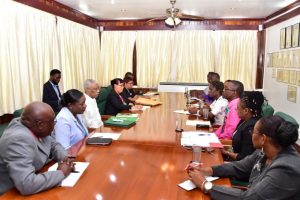 President David Granger and his delegation meeting with the GTU representatives.

The Guyana government is offering teachers a 10 percent salary increase for 2016, eight percent for 2018, and GY$350 million to adjust some salary scales, a Guyana Teachers’ Union official confirmed Monday night.

Asked about the fact that no mention was made of a salary hike for 2017, a senior union official said on condition of anonymity the GTU would be seeking clarification from the government on Wednesday when the two sides are due to meet again.

In 2017, government had told the GTU that increases ranging from eight percent to half a percent in 2017 should have been treated as an interim payout.

The official said the additional GY$100 million for ‘debunching’ on top of the earlier offer of GY$200 million would be sufficient to cover the period 2011 to 2018.

The teachers had been pressing government to pay a 40 percent increase for 2016 and five percent annually up to 2020, but after the two-week strike was called off in September, the union said it was willing to accept 20 percent.

President Granger was quoted in a statement issued by his ministry that he hoped the long-running pay dispute would come to an end on Friday. He also disclosed that GTU representatives met with Minister of Education, Nicolette Henry last week Friday.

“We have had some hiccups but we now seem to be coming to the end of the road. There seems to be wide areas of what I would say common acceptance of what needs to be done. Minister of Education had a long meeting on Friday, October 5 with the Union and… all of the points that were at issue between the two sides were discussed… We have agreed that the two sides would meet again on Wednesday, October 10. The intention is to create a basis for an agreement between the two sides as early as possible, possibly by Friday,” Granger said.

The latest round of talks followed another round of the souring of industrial relations between the union and government after Junior Minister of Labour Keith Scott had imposed University of Guyana Professor Leyland Lucas as chairman of the three-member arbitration panel to settle the pay dispute.

However, the GTU had rejected Lucas’ appointment on the grounds that he is a government employee and the resumption of work agreement and the relevant labour law provides for mutual agreement instead of compulsory arbitration.

The meetings between the union, Minister of Education and the President came at a time when efforts were underway to mobilise teachers for a second round of strike action. This time around their planned action was endorsed by the Guyana Trades Union Congress and the Federation of Independent Trade Unions of Guyana.