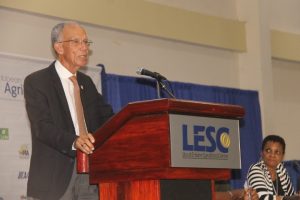 Sir Trevor Hassell, the President of the Healthy Caribbean Coalition- an  internationally-recognised non-profit organisation in the fight against non-communicable diseases- on Monday challenged agriculture stakeholders across the region to take up huge swathes of land in Guyana and Suriname to produce healthy foods.

“I challenge all in agriculture to pursue means of developing agricultural opportunities in Guyana and Suriname where there is readily available fertile land to grow and produce healthy local food,” Cassell told the opening of the Caribbean Week of Agriculture (CWA) being co-sponsored by the Barbados government and the Technical Centre for Agricultural and Rural Co-operation, a joint international institution of the African, Caribbean and Pacific (ACP) Group of States and the European Union (EU).

He  cited the need for Guyana and Suriname to become the “Caribbean NCD prevention food baskets of the Caribbean”.

Barbadian, Sir Kyffin Simpson, several years ago began planting a variety of crops at Santa Fe farm in southern Guyana. The majority of the produce is said to be exported to neighbouring Brazil.

With an estimated 60 percent of health budgets in the Caribbean being spent on treating heart ailments, diabetes and hypertension, Sir Trevor recommended the “significant participation of the agricultural community” in NCD inter-ministerial committees and commissions. 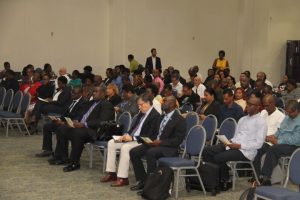 “These platforms have the potential to provide opportunity for the agriculture sector to partner with the public and private sectors, and with civil society in a “whole of society” effort to strengthen agriculture for a healthier region,” he added.

The President of the Healthy Caribbean Coalition said Caribbean stakeholders need to pay closer attention to the link between climate change, agriculture and NCD prevention in the creation of a healthier future.

Making a pitch for agriculture to be seen as having a unique and critical role in improving the nutritional status, he cited the need for a regional or national food system sensitive to nutritional outcomes. Caribbean governments, he said, must “develop and implement a comprehensive range of well-targeted policy actions”  to foster nutritious, health diets backed by solid health-friendly policies.

The Healthy Caribbean Coalition noted that of the 120,000 Barbadians 20 years and older, 90,000 are overweight  or obese, 38,000 suffer from hypertension or high blood pressure, 19,000 are diabetic and at least on person suffers from a stroke or heart attack every day. He said three years ago, Barbados spent BDS$64 million on treating cardiovascular diseases and diabetes. and the Barbadian economy was estimated to be losing BDS$145 million annually to missed work days low productivity a d reduced workforce participation.

2018-10-08
Denis Chabrol
Previous: GTT did not threaten legal action to force disconnection of Digicel’s Suriname data link- Nedd
Next: Govt offers teachers pay increases for 2016, 2018 but no word on 2017; amount increased for de-bunching