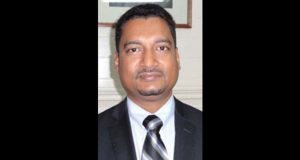 Told that the police have sent the file for legal advice, Savitri Singh briefly said she would then expect both parties to be charged based on what transpired.

Divisional Commander, Assistant Commissioner, Marlon Chapman confirmed that the file has been sent to the Criminal Investigations Department (CID) for onward transmission for legal advice.

He said CID would decide whether the file should be sent to the Police Force’s Legal Adviser, Retired Justice Claudette Singh or the Director of Public Prosecutions (DPP).  Demerara Waves Online News was told that the file is in fact with the DPP.

Chapman said the police received a report that Savitri Singh slapped Justice Singh following a minor traffic accident that occurred in broad daylight on Camp and Lamaha Streets in September, 2018.

The details of the incident are sketchy. Savitri did not go into details, but she said she filed a statement with the police outlining her side of the occurrence and she agreed to compensate the Judge for damage to his vehicle and shades.

Back in June 2016,  private criminal charges of use of threatening language, whereby a breach of the peace may have occurred and exciting hostility on the grounds of race, by means of words spoken to him had been filed by a motorist who had been charged with dangerous driving.

In August of that year, the chauffeur of Senior Counsel Bernard Dos Santos had sued Justice Singh for GY$5 million for trespass to the person, assault, unlawful arrest, wrongful imprisonment and embarrassment, humiliation and nervous shock as a result of Justice Singh’s purported instruction to arrest the driver because he had stopped the vehicle near the stairs in the High Court compound to assist the elderly and sick lawyer to enter the Courthouse.

2018-10-06
Denis Chabrol
Previous: Suspected Venezuelan pirates attack Guyanese fishermen
Next: “E-Networks is carving for itself a place on the national spectrum” – PM Nagamootoo