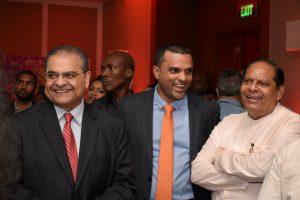 Congratulating the E-Networks company as a leader in innovative cable television services, Prime Minister Moses Nagamootoo said it pioneered the transformation of quality services via cable and high definition fibre optics.
On the evening of October 5, the telecommunications company celebrated its 15th anniversary with a gala cocktail at the Marriott Hotel, Kingston Georgetown.

The Prime Minister was quoted by government’s Department of Public Information as saying that during the recently concluded CPL cricket competition, he was pleased to access the company’s HD coverage, “which when completed will provide services to Guyanese which are not otherwise available.”

The veteran politician said he looked forward to the company being at the forefront of the ICT and digital revolution and hoped it could expand into a provider of mobile telephone services. The company’s “invaluable contribution for deepening Guyana’s connection to the world, with programming that is available 24hrs per day” was also lauded. In closing, the prime minister added that he and his wife, Mrs. Seeta Nagamootoo also enjoyed the musical talent shows, and almost exclusive scheduling of South Indian movies.

“There is no doubt that E-Networks is carving for itself a place on the national spectrum as an authentic home-grown business, whilst training and hiring local young Guyanese,” Prime Minister Nagamootoo stated.

Congratulatory messages were also given by the Guyana National Broadcasting Authority’s (GNBA), Chairman Leslie Sobers. He noted that the company has distinguished itself as a proponent of facilitating the reception of information in a responsible manner.