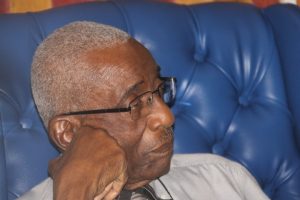 Seemingly frustrated with racially motivated political bickering at the Guyana Elections Commission (GECOM), the Chairman of the country’s elections management authority, Retired Justice James Patterson on Friday did not rule out resigning from the post if those state of affairs continue.

“It is even more sad to see that the default position of our politicians seems to be to play the racial card. It seems, too, that integrity has been put in a blind trust. It seems to be that politicians have retreated into ethno-political camps. That has got to stop if this country is to move forward,” he said.

“No”, he said when asked whether he was ruling out stepping down from the chairmanship of the commission if the situation continues.

He claimed credit for having personally done “all that is humanly possible to weld the opposing factions together” but “it seems that things are getting worse”.

With several court cases, including those challenging GECOM’s acceptance of nominators and candidates, his appointment as GECOM Chairman, Retired Justice Patterson said the court system has “become a tool of disruption” and perhaps a member of the legal profession might mount a high court challenge against “the misuse of the legal system”.

Declaring that “these are troubling times for elections in Guyana”, he expressed grave concern that plans were afoot to postpone the November 12, 2018 local government elections.

“The Commission has been experiencing at every turn designs and machinations to stymie the elections coming fore,” said Justice Patterson whose unilateral appointment by President David Granger continues to be shrouded in political and legal controversy.  Patterson declined to provide details to back up his claim, but said there were enemies that were undermining GECOM’s work. “It is self-evident that the objective is to stall the forthcoming elections,” he said.

GECOM says there will be ‘no-contest’ in 174 of the 596 constituencies, and 573,923 persons are eligible to vote at the 1,684 polling stations for town and neighbourhood democratic councils.

Saying that anyone who wants to destabilise GECOM’s work was “tampering with democracy”, the Elections Commission further remarked that “it doesn’t help that oil seems to be the harbinger of hope”.

On the controversial claim by People’s Progressive Party (PPP)-nominated GECOM Commissioner, Robeson Benn that almost 100 percent of the employees at GECOM are Afro-Guyanese, the Elections Commission said he was placing greater emphasis on competence rather than merely race. “We are making a deliberate effort to get the best people for the job,” he said.

“Ultimately, when we have to make a choice, quality trumps race. I see nothing wrong with that,” he said.

The Ethnic Relations Commission is investigating a complaint of ethnically imbalanced employment practices at GECOM.

There are 380 permanent staff members at GECOM.