Guyanese carpenter wins US$245 million Lotto in the United States 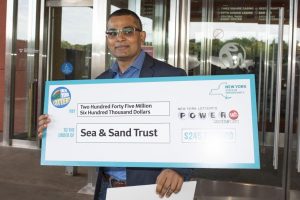 But other than that, he has no plans.

“I’m sure my life is gonna change a lot,” he told reporters.

“It’s a lot of money,” Mangal said. “I have no idea what’s going to happen,” aside from that trip to the tropics.

And this: When he actually sees the money, “I’ll probably pass out.”

Mangal, 42, bought a $6 Quick Pick ticket on Aug. 11 while picking up groceries at the Stop & Shop supermarket on Hylan Boulevard.

The Guyanese immigrant, a carpenter who lives with his wife in a humble ranch home in New Dorp, remembers putting away his groceries and tossing aside the ticket.

He didn’t learn he was filthy rich for days, after he heard no one had claimed the winnings and he figured he should look at his ticket before throwing it out.

“The ticket sat on my kitchen table for a week because I was out of town,” on vacation in Ocean City, Md., he said.

“I really don’t check the ticket that often,” Mangal said of the few times he has bought one, generally when the jackpot goes north of $100 million.

“Who’s going to think they won the lotto?”

Next-door neighbor Alex Zub, 20, told The Post that Mangal and his wife live alone in their three-bedroom home.